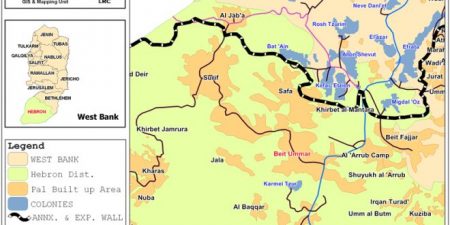 According to the PNN. the Center for Freedom and Justice in Beit Ummar village, to the north of Hebron, is facilitating a popular struggle, with grape trees and vegetable fields as key components.

Beit Ummar has, for several years, been a hot spot for nonviolent popular struggle against the Israeli occupation. The village, of approximately 18.000 inhabitants, has been subject to the expansion of six Israeli settlements surrounding the village. Until 2010, the popular struggle in Beit Ummar consisted mainly of weekly demonstrations protesting the on-going annexation of village land. But, the formation of the Centre for Freedom and Justice (CFJ) has changed this.

Director Muna Ammar explains: “When we demonstrated at the Israeli checkpoint near the city’s entrance, protesters were injured, imprisoned and killed by the Israeli forces and teargas would drift in to the adjacent houses. We realized that our struggle for freedom had to play on more strings, so we decided to stop focusing on demonstrations and the Centre for Freedom and Justice was formed.”

The CFJ‘s main focus is to assist farmers in cultivating land next to the settlements. Before CFJ started this work, the farmers owning the land were not able to cultivate it, due to insufficient funds, fear of settlers attacking, and scarcity in the water supplies. The fact that the land was not being used made it a vulnerable target for annexation from the surrounding Israeli settlements. CFJ’s capacity for an international outreach enabled Beit Ummar to achieve donations from two French communities, the Rhone-Alps and Bakar region, through an NGO called MAN. The donations have been diverted, into the local community, in the form of water reservoir construction and 1800 trees, to this date. Another feature of the CFJ’s work is to invite international volunteers to take part in the cultivation, as well as acting as a protective presence seeking to prevent settlers attacking farmers working on their land.

The economy in Beit Ummar relies heavily on farming, a difficult sector to be in, as the water resources in Palestine are extremely scarce. The low amounts of water are distributed extremely unfairly by Israeli authorities. Every Israeli settler has 240-300 litres at their disposal per capita,  on a daily basis, while the amount for Palestinians is estimated to be around 70 litres.

“Most farmers can only plant on half of their land, because there isn’t enough water.” Ammar states. But, the lack of water is not the only obstacle the farmers face in Beit Ummar. The IDF tries to stop the villagers from claiming their land through cultivation by issuing stop work orders.

The land is located in area C and, hence, under full Israeli military and civil control. The last stop-work order was issued in 2015. The CFJ now awaits a supreme court decision on whether the stop-work order can continue. During the legal process, the farmers can work on the land. The farmers have also been subject to aggressiveness from illegal settlements situated around the village. In 2011, the Farat Tzioh settlement emptied its wastewater reservoir onto Beit Ummar farmland. Since the Farat Tzioh is on a hill, the dirty water ran down on village farmland where vegetables were planted. The wastewater not only destroyed crops worth thousands of shekels, but also contaminated the land, making it useless as farmland for months. Incidents in which settlers have physically assaulted farmers or cut young trees down have also been reoccurring events.

Beit Ummar is placed in area C and B, and under full Israeli military control, and, partly under Israeli civil control. Area C and B have a history of being overlooked by the Palestinian Authority, something that caused Beit Ummar citizens to form the CFJ, in order to further the economic growth of the village. The CFJ has been sharing its experiences with other communities in similar situations; it supported a project for women producing honey in an area-C village near Ramallah and, in addition to that, the CFJ has activities in the Jordan Valley.

The CFJ keeps developing new methods to boost the local community, it has created an English school for local kids. When it comes to farming, the CFJ is, right now, in the midst of building up to 6 greenhouses, which can allow farmers to cultivate different fruits and vegetables.