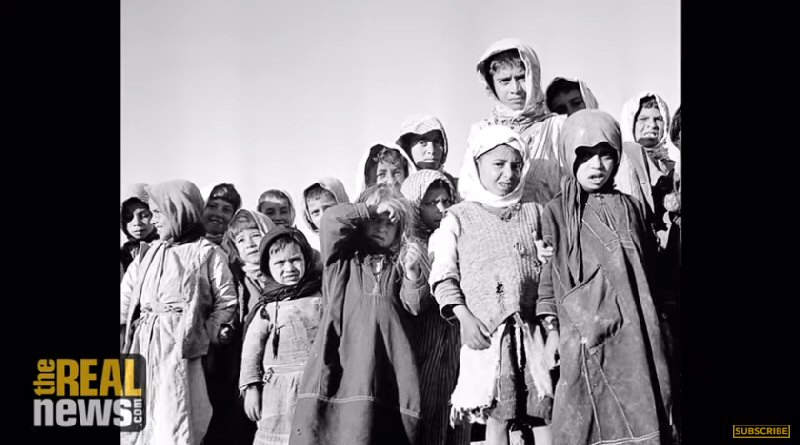 Professor Ilan Pappe discusses why Israel’s agency in charge of nuclear security hid documents about the Nakba, the catastrophe in which Palestinians were driven from their land in 1948, explaining that it was an effort to eliminate the Palestinian narrative.

A scandal broke out in the Israeli media recently, when it became known that the Israeli government has been engaged in a systematic effort to conceal official documents on the Nakba, the ethnic cleansing of Palestine, in 1948. The documents were collected from Israel State Archives and taken to locked vaults in the Ministry of Defense. Journalist Hagar Shezaf, from the newspaper Haaretz, discovered this concealment effort when she visited state archives to re-examine documents that had been revealed before and had been cited by some of Israel’s most prominent historians.

She was told that the documents were removed from the archives and she then tracked them down to the Director of Security of The Defense Establishment. This is an institution that is officially charged with protecting Israel’s nuclear secrets, and not with hiding facts that deal with the establishment of the state of Israel.

Here are a few quotes from the hidden documents: “In the village of Safsaf, 52 men were bound in ropes, dangled into a pit where they were shot. In a raid on the village of Safsaf, we blew up 20 houses with everything inside; with people sleeping there, I imagine so. Within 48 hours, I laid these villages flat. Ben-Gurion determined that we must destroy them so they will not have anywhere to go back to. Jewish hostile acts were the main reason for the population’s immigration.”

Security officials that Shezaf interviewed admitted that the documents were hidden in order to prevent them from hurting Israel’s reputation and to cast doubt on the work of historians who cited these documents. One of the historians who has researched and written on the Nakba is Ilan Pappe, who joins us now. He recently wrote an article for the Electronic Intifada titled Israel’s Latest Attempt to Erase Palestine. Ilan is professor at the College of Social Sciences and International Studies at the University of Exeter in the United Kingdom. His most recent book is titled Israel. Thanks for joining us today, Ilan.

ILAN PAPPE: It’s a pleasure to be on the program.

GREG WILPERT: So in your piece for the Electronic Intifada, you explained that this act of concealment is part of an effort to erase Palestine, not just the history of 1948. What do you mean by that?

ILAN PAPPE: I mean that there is a concerted effort by the American administration and by the present Israeli political elite to depoliticize the Palestine issue, to turn it into an issue of economy, of business, maybe of welfare, but not an issue anymore of national rights, of justice, and of self-determination. And one of the ways in which you can depoliticize a national movement is by destroying its narrative, by undermining its narrative. And one of the main success that had been achieved in the last 10 or 20 years was the fact that Israeli historians using Israeli documents have substantiated major chapters in the Palestinian narrative, and that this helped to legitimize this narrative and to create the basis for the moral demands of the Palestinians, whether it is for the right of return or for self-determination, or for the decolonization of Palestine.

GREG WILPERT: Now, Palestinian historians rarely have access to Israeli state archives because they need a permit to enter Israel first. Yehiel Horev of the Ministry of Defense specifically spoke about undermining historians, mainly Israeli historians such as yourself, to prevent them from reporting what happened in 1948. What has been the reaction from Israel’s academia to the Ministry of Defense’s effort to undermine historical research?

ILAN PAPPE: Oh, we have a very domiciled academia in Israel nowadays. There was one or two voices of dissent or even anger, but more or less, if one can talk about the academia in general terms, it accepts this position by the Israeli politicians or the officials who are responsible for declassification and censorship. You have to remember we’re talking about 2019 when the Israeli voices of criticism have long disappeared, and both the academia and the media are very loyal to the national narrative and to the basic explanation that are given by politicians and official that these kinds of revelations can undermine Israel’s international image and can be abused if they are used by the wrong historians. So I think that one, to not expect any outcry from within against this act, as I think most academics would accept it as part of the national interest or as part of defending the national security of the Jewish state.

GREG WILPERT: Now, despite the effort to deny the history and to conceal it, isn’t it true that contemporary Israelis are quite aware of the story of the Nakba? Organizations such as Akevot, Zochrot, and more are working to expose these facts and publish them in Hebrew, and historians such as yourself are providing proof. However, pro-Israel groups outside of Israel seem to be ignorant or feign ignorance and pretend that the Nakba was a myth. How do you explain this contradiction?

ILAN PAPPE: First of all, I would slightly disagree with you about the level of knowledge or even interest among the Israeli Jewish society about 1948. I think it is true to say that many more Israelis today know about the Nakba than before, but I still think that graduates of the Israeli educational system, namely people who are now in high school, would finish high school without knowing anything about what happened in 1948 and would still be taught the fabricated version of events. Yes, among liberals, there is a greater knowledge of 1948, and that’s very encouraging. So I don’t think there is that much of a difference between the level of knowledge among pro-Israeli groups outside of Israel and among the general public inside Israel. Therefore, I think this is a very important struggle; the struggle against erasure, the struggle against the denial. Because too many people don’t know, or too many people choose not to know.

Luckily, despite this closure of documents, we have enough documents to prove beyond any doubt that the events in 1948 constitute an act of ethnic cleansing against the Palestinian people, which is a crime against humanity. There is enough evidence already gathered, enough documents already scanned and digitized. We need to collect them properly; we need to catalog them properly. But together with the oral history project that many young Palestinian scholars are engaged with these days, I think that at least this from the perspective of scholarly evidence and the ability to tell the story as it really happened, from this perspective, the Israelis have missed the train. It’s too late to create this kind of reality where you won’t be able to prove beyond doubt the crimes committed in 1948 and the magnitude of the ethnic cleansing operation that Israel perpetrated against the Palestinian people in 1948.

ILAN PAPPE: I wish the reaction in the world would have been stronger and more vociferous. I think this is closely associated with the question of the BDS, the campaign of cultural and academic boycott against Israel. This is another proof for the fact that the Israeli academia is not a place where freedom of expression is being respected and much more than that, this is a place that is complacent in the face of attempts for a culturicide and the erasure of collective memory and evidence of the crimes committed in 1948. It’s not that easy to get the academia around the world to take bold actions such as collective decisions by academic societies, whether it is the associations of the historians around the world that should really take a firm position on this. But not only on this, because this particular episode is just a symptom of the overall campaign of Israel throughout the years to not only erase the Palestine and the Palestinians physically, but also to wipe them out or expunge them from historical memory and from history.

And the Palestinians deserve far more active support and moral support from academics around the world. Until now, too many of them have been either indifferent or too silent about this particular connection between a collective memory, history and the actual existence of people in their homeland.

GREG WILPERT: Okay. Well, we’re going to leave it there for now. I was speaking to Ilan Pappe, professor of history at the College of Social Sciences and International Studies at the University of Exeter. Thanks again, Ilan, for having joined us today.

ILAN PAPPE: Thank you very much. Thank you.