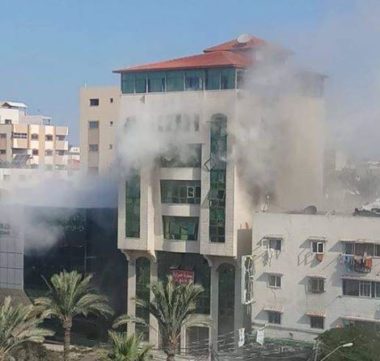 After being targeted by Israeli missiles, the Independent Commission for Human Rights in Palestine (IHCR), issued a statement denouncing the military escalation, and calling for an international investigation at the highest level.

At approximately 09:50 AM on Tuesday, 12 November 2019, the headquarters of the Independent Commission in the Gaza Strip, which occupies the fifth, sixth and seventh floors of a multi-story building near the Palestinian Legislative Council in the center of Gaza City, was targeted by Israeli missiles.

Mr. Bahjat Al-Helu, ICHR’s Coordinator of the Awareness and Training Unit in the Gaza Strip, was slightly injured.

It was a fortunate coincidence that the colleagues on the targeted floor just left the place a few minutes prior the shelling to participate in a meeting on the seventh floor, otherwise, they would have been directly hit.

The Independent Commission for Human Rights condemns the attacks on its offices in Gaza City and calls upon the international community to take urgent action to stop the aggression carried out by the occupying power since the early morning of today, Tuesday.

The Israeli army targeted the house of Baha’ Abu Al-Ata in the neighborhood of Al-Sheja’eya in Gaza, assassinated him and his wife, and wounded his children.

Furthermore, ICHR calls for stopping Israeli war crimes and spare civilians a high humanitarian cost in light of the deterioration of the Gaza Strip in its economic and social conditions.