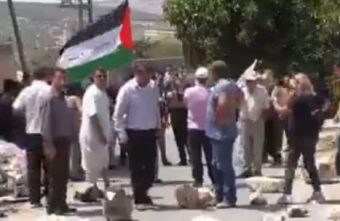 Hundreds of Palestinians marched, Friday, in the weekly protest against the Israeli Annexation Wall and colonies in Kufur Qaddoum town, east of the northern West Bank city of Qalqilia, also demanding Israel to reopen the town’s main road that was closed more than 13 years ago.

Morad Eshteiwy, the media coordinator of the Popular Committee in Kufur Qaddoum, said the protesters also marched in solidarity with detainee Motawakkel Taha, from Azzoun town, who is facing very serious health complications.

Eshteiwy added that Taha, who is serving a 22-year imprisonment sentence, is at a serious risk of a stroke, while the Israeli prison authorities are withholding any information regarding his current situation.

Eshteiwy also said that, unlike previous weeks, the Israeli army did not invade the town, and is apparently using a new method by not attacking the activists, but ambushing them later to abduct them, especially since the soldiers have recently started ambushing the activists at different times, and abducted many of them last week.