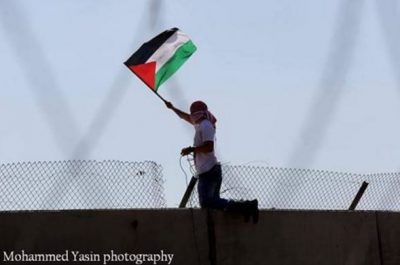 Dozens of Palestinians, Israeli and international peace activists held, Friday, the weekly nonviolent protest against the Israeli annexation wall and colonies, in Bil’in village, northwest of the central West Bank city of Ramallah.

The procession started from the center of the village, while the protesters carried Palestinian flags, and posters of hunger striking detainees in Israeli prisons, especially Malek Qadi, Mohammad Balboul and his brother Ahmad, who are facing life-threatening complications.

The protesters chanting “Free Palestine,” called for ending the illegal Israeli occupation of Palestine, and ending the escalating violations against the Palestinian people, their lands and property.

Iyad Burnat, a nonviolent activist from Bil’in, said that a large group of supporters from Ireland, England, Germany and Spain participated in the procession, as part of their visit to listen to the locals and observe the devastating impacts of the illegal Annexation Wall and colonies.

“For the second week, we saw no soldiers as we walked the route we have for 12 years and wonder if this is a new tactic employed by the Occupying forces to ignore us, to see whether we will give up on our fight for our land and rights as Palestinians,” Burnat said on his Facebook page.

As we approached the wall, we chanted “Free Palestine” and called for an end to the Occupation. Our Irish friends shouted with passion by our side.

We succeeded in flying the Palestinian flag from the apartheid wall, as one of our brave activists climbed it with support and was also able to cut part of the fencing at the top of this. He was followed by an Irish activist who flew the Irish flag; although his plans were cut short as soldiers approached the wall and climbed the stairs, causing demonstrators to disperse.

As we began our journey back to our homes, we were met with Settlers shouting insults and our international supporters responded with further chants to ‘Free Palestine’ and victory signs, confident that no o lasts forever and with the tide turning to public opinion, we will gain our freedom and self-determination.

We stopped at Bassem’s memorial so that I could explain to our visitors the significance of the area and about the precious life that was taken from us, our dear never forgotten friend, Bassem, who was killed already seven years ago by a gas canister fired directly into his chest by the Israeli army.

The afternoon was concluded with lunch at my home and a talk and video concerning the Occupation and Bil’in’s creative and non-violent resistance; which is mirrored in other villages around the West Bank.