Israel Forces Palestinian To Demolish His Home In Jerusalem 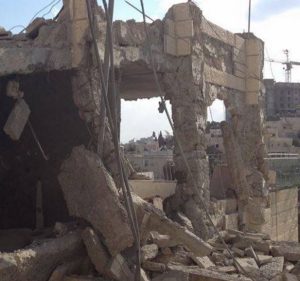 Israeli soldiers forced, Friday, a Palestinian man to demolish his own home, in Jabal al-Mokabber town, south of occupied East Jerusalem, after the City Council ruled for the demolition of the property, under the pretext of being built without a permit.

The Palestinian, Morad Ja’abees, built him home ten years ago, and was living in it with his wife and eight other family members.

He resorted to demolishing the property as the fines and costs are more than 80.000 Israeli Shekels, should the City Council conduct the destruction.

“I received a demolition order three months ago,” he said, “Having Israel demolish my home would costs me much more than the costs of destroying my home on my own – It is very hard for a human being to destroy his home after he built it brick by brick….”

“I am from Jabal al-Mokabber; I was born here, raised her and will continue to be here, even if I have to live in a tent,” he added, “Israel is practicing ethnic cleansing against us, wants the Palestinians out of occupied Jerusalem.”

It is worth mentioning that dozens of Palestinians volunteered to help the Palestinian since early-morning hours until the evening, especially since they also had to remove the rubble as part of the Israeli ruling against the property.