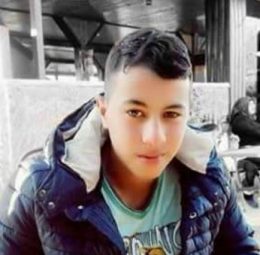 Israeli soldiers shot and killed, on Friday evening, a Palestinian child in Tal Romeida area, in the center of Hebron city, in the southern part of the occupied West Bank, after the soldiers claimed he stabbed an injured one soldier.

The child, identified as Mohammad Kayed Thalji Rajabi, 15, was shot and bled to death after the soldiers prevented Palestinian medics from approaching him, and declared the area as a closed military zone.

The Israeli army said one soldier suffered mild-to-moderate wounds, before other soldiers fatally shot the Palestinian. After killing the child, the soldiers took his body to one of their nearby military bases, and later summoned his father to identify him.