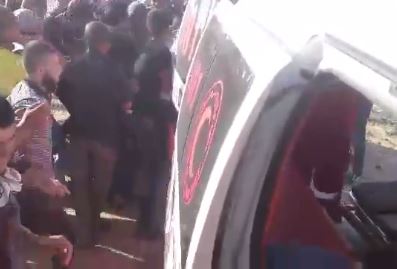 The soldiers, stationed across the border fence near Nahal OZ military base, east of Gaza city, fired many live rounds at scores of young men protesting in an area close to the border fence, wounding a young man in his leg.

The soldiers also fired many gas bombs, causing scores of residents to suffer the severe effects of teargas inhalation.

In addition, soldiers stationed in a military base, across the border fence, east of the al-Boreij refugee camp in central Gaza, fired many live rounds at Palestinian protesters, wounding one in the arm and another in his thigh. Both were moved to the Al-Aqsa hospital in nearby Deir al-Balah town, suffering moderate wounds.

Furthermore, Palestinian medical sources have reported, on Friday evening, that a number of Israeli military jeeps invaded the al-Jalazoun refugee camp, north of Ramallah, and shot two young men with live fire, while many residents suffered the effects of teargas inhalation.

In addition, the soldiers kidnapped two Palestinian teenagers from the town of al-Yamoun, west of the northern West Bank city of Jenin.

Also on Friday evening, the soldiers invaded the town of Beit Ummar, north of the southern West Bank city of Hebron, fired many gas bombs, including a new type of smokeless bombs, and rubber-coated steel bullets, wounding many Palestinians, and kidnapped a teenager.

It is worth mentioning that the soldiers shot and killed young Palestinian man, and injured a woman, after opening fire on their car, close to the entrance of Keryat Arba’ colony, in Hebron city, in the southern part of the occupied West Bank.