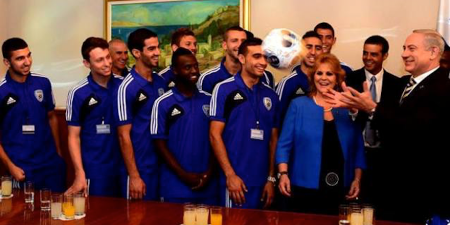 The Zionist symbolism of Israel’s national football team creates a quagmire for its Palestinian Israeli fans.

Support for Israel’s national football team indicates that while Palestinian citizens of Israel have an unusual opportunity to identify with an Israeli national symbol, this identification is, it goes without saying, far from being without problems and impediments.

The national football team’s appearance is not isolated from the other state symbols present on the field or sidelines prior to, during or after the game: the blue and white colors of the team, the menorah symbol on the uniform and, of course, the national anthem played before the game. An internationally televised football game is thus transformed into an arena in which Palestinian Israelis encounter a collection of symbols, some of which include them while others marginalize them.

Hebrew-language sports reporters (which, according to a survey, are the Palestinian Israeli publics’ primary source of football consumption) occasionally ask the Palestinian players difficult or even violent questions concerning their relation to the flag and anthem, or their position as “Arabs” representing the state of Israel. The most common response of these players emphasizes their status as professional players and often, to please the press, they add a sympathetic message concerning state symbols or conversely, declare their ignorance or lack of knowledge of the national anthem’s words. In my estimation, the discourse accompanying these interviews by journalists is intended primarily for Jewish consumption considering its self-flattery of Israeli society, which is presented as an unbiased creator of equal opportunities.

A poignant example of this dynamic appeared in Maariv newspaper in October 2000. Just a few days after the police shot and killed 13 Palestinian citizens of Israel, the Israeli national team played an away game against Milano. There, the presence of Walid Badir as a symbol of the team received particular attention. The headline in Maariv concerning preparations for the game reflected a tendency of the Hebrew language press to present football as an integrative arena: “Badir: I have a goal to win for everyone.” In the article itself, reporter Ron Amikam quoted team captain Tal Benin, who said, “Walid is one of us and he isn’t different from anyone else. To win this game, all players must be together.” The reporter continued: “Badir, by the way, doesn’t understand all the fuss. Yesterday he even asked cynically: ‘tell me, what happened that made you come to me with all these questions now? You’ve never asked me such questions.’” Thus, the overlapping interests of the Palestinian player on the Israeli national team (international exposure) and the Hebrew-language press (a liberal self-image) present the national team as an integrative experience.

Even though the target audience of this discourse is the Jewish public, Palestinian citizens of Israel are exposed to the national football team as it’s portrayed in the Hebrew language press and are forced to deal with the prominent presence of Zionist symbols. In interviews I conducted with Palestinian Israeli football fans, it is possible to distinguish a variety of coping strategies vis-à-vis this special situation. One of the strategies – replacing the words of the anthem – has already been mentioned. Three additional strategies include: ignorance, division and separating the player from the team. It is important to note that supporting the team has a tactical element. Fans who supported the team wanted very much for me to know this. It seems that in their estimation, conveying support for the national team underscores their status as citizens with equal rights in the state.

The strategy of self-professed ignorance is the most common manner for dealing with the contradictions between supporting the team and the Zionist character of its games’ ceremonies. Walid Sindiani, age 45 and a gardener, is the “king of fans” of the Ahi Nazareth football team. A local joke goes that he has never seen his team score a goal because he is always turned away from the field, with his face to the crowd. He leads singing and chanting, accompanied by a darbuka drum between his knees. When Sindiani speaks of his relationship to the Israeli national team, it is apparent he hopes his support for the team will promote his status as a citizen with equal rights. When speaking with me, he attempted to use his support for the team to secure my recognition of his claim to equal rights in the country. The use of support for the team as a negotiating tool for rights increases the need to moderate the conflicts inherent in this support, such that the strategy of ignorance is the easiest way.

We are Israelis, darling. We are Israelis, it interests me… the Israeli national team is mine. I’m not from Gaza and not from Jordan. I’m Israeli. I, Walid Sindiania – it is written [on my identification card] that I’m Israeli. So everything in Israel interests me. It also interests me to receive a proper livelihood just like the Jews, because I’m Israeli and really, I deserve it, do you get it? And everyone is praying today the national team will win and I’ll tell you the truth – and that Najwan [Ghrayib] will score a goal – that’s most important.

Question: when the game begins, the players stand and sing the anthem, what does that say to you?

Look, the truth, I’m not with them there. If I would be at the game I would stand and give respect just like one should, but if I’m at home I’m quiet until they are finished. I wanted to learn the words and the song, but I didn’t get it, it’s a bit difficult. But… for example… I was with Najwan in the Olympic team. When they played against Lithuania and Romania, I was once… in Ashdod, and once in Kiryat Eliezer, I stood with everyone one… but I didn’t understand the song. I wanted to sing, but I didn’t know it. But, respect, I gave.

The presence of Najwan Ghrayib, a former Nazareth player on the Israeli national team, allows Sindiani to root for the team without doubts. Nevertheless, it’s important for him to emphasize that he supports the team and deserves the same rights as a Jewish-Israeli. This self-defined ignorance protects him from the need to confront the symbolic meaning of the Israeli national anthem: he doesn’t understand or doesn’t get it. As noted, the use of ignorance is particularly common when the Hebrew language press interviews the team’s Arab players and asks about their attitude to the anthem. They generally respond that in school they were not taught the words, exempting themselves from the embarrassing question.

Another strategy is division. Walid Ayoub, writer, author and journalist, details his feelings as Israel’s national anthem is played before a game of the national team:

Question: and the national team?

In making the distinction between the anthem, which represents the national team, and the national team itself, Ayoub adopts a view of the team devoid of ethnic-national symbols. Ayoub’s statement is weighty as he isn’t an average fan. While I was conducting the interview, Ayoub was editing the sports section of a newspaper of the National Democratic Assembly, which expresses Palestinian nationalist politics in the clearest and most definite manner amongst all the Palestinian papers in present-day Israel. His willingness to take the rare opportunity to identify with an all-Israeli symbol illustrates how wide the gap is between the aspiration of Palestinian citizens of Israel to be treated equally in the Israeli public arena and the willingness of the state to permit this. As Palestinian Israelis play on the national team, he has no doubt the team represents him.

A third coping strategy is common amongst football fans who oppose the Israeli national team. Its essence is a distinction between the player and the team. Qasem, a 26 year old attorney, reminisces about the time when Zahi Armali and Rifaat Turk played on the national team: “When I watched the Israeli national team I wanted it to lose, but when the Arab players, Armali and Turk, were included, I had a dilemma – I wanted the team to lose, but I wanted them to score and prove themselves.” Qasem wants recognition of Palestinian talent by the Jewish majority. Despite his opposition to the national team as a symbol of Zionism, when Palestinian players participate, it is important for him that they “prove themselves.”

A similar attitude is displayed by Amin, a shop owner from Sakhnin: “When I see Najwan Ghrayib during the national anthem I pity him that he must stand, for the anthem doesn’t say anything to him. Yet when he plays I am proud of him that he represents me.” Again, the desire to take part in the public arena and receive recognition and representation is evident. Amin’s comments represent a common feeling amongst football fans with whom I spoke – deep identification with Palestinian players, even if it’s difficult for them to identify with the national team.

During the entire period of research – in conversations, interviews and sports journalism – I almost never encountered protest against players willing to represent the state of Israel internationally. On the other hand, in conversations with people who are not sports fans, I encountered protest and even anger. This fact strengthens the view that football provides those who take part a unique hope (or illusion) that is not shared by those not involved.

This is an excerpt from the book Football Belongs to the Fans: Research Journey in the Wake of Hapoel Katamon Jerusalem (Hebrew). It originally appeared on the website “Hagada Hasmalit”, and was translated into English by the Alternative Information Center (AIC).