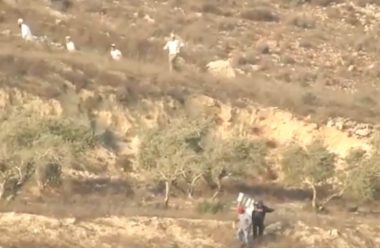 A group of illegal Israeli colonialist settlers attacked, Saturday, many Palestinians while picking their olive trees in orchards owned by Burin villagers, south of the northern West Bank city of Nablus.

The WAFA Palestinian News Agency quoted the villages stating that the assailants came from Givat Ronen illegal colony, which was built on private Palestinian lands.

They said that the assailants attacked many villages by throwing stones at them, and kicked them out of their lands, after stealing equipment the villagers use in picking their olive trees.

The colonialist settlers also spilled buckets, which were filled with olives picked by the villages, and forced them out of their lands.

Such attacks always escalate during the olive harvest season in occupied Palestine, and including cutting and uprooting trees, bulldozing lands and even flooding them with sewage water.