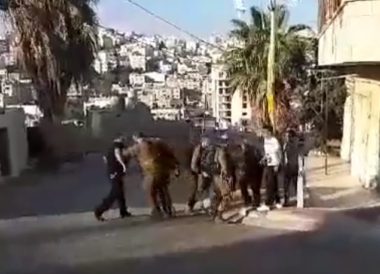 Local sources said the Israeli assailants came from the illegal Ramat Yishai and Beit Hadassah colonies, which were established on private Palestinian lands and property.

They added that the colonists brought dogs with them, and assaulted several Palestinians, causing a fracture in the face of Riyad Salhab Tamimi, before Red Crescent Medics rushed him to the al-Ahli Hospital in the city.

Also on Saturday, colonialist settlers attacked many Palestinians while picking their olive trees in orchards owned by Burin villagers, south of the northern West Bank city of Nablus.