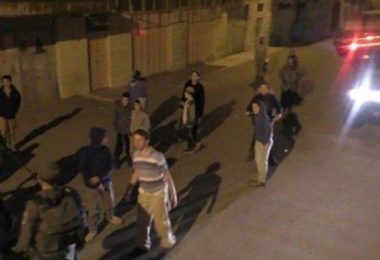 Dozens of illegal Israeli colonialist settlers hurled stones, on Saturday evening, at Palestinian cars driving at the junction of Gush Etzion colony, north of Hebron, in the southern part of the occupied West Bank, and shouted insults and threats at the Palestinians.

Media sources said around 50 illegal colonists gathered at the junction, and around Beit al-Baraka, near the al-‘Arroub refugee camp, which was illegally occupied after Israel decided to annex it to Gush Etzion in 2015.

The sources added that the colonists attacked the cars with stones, and uttered death threats against the Palestinian drivers.

It is worth mentioning that the colonists recently carried out ongoing assaults targeting Abu Srour family home, near Beit al-Baraka, to illegally occupy and annex it.

On Thursday, dozens of illegal colonists surrounded the home, and many of them attacked the family, while Israeli soldiers assaulted many Palestinians who rushed to aid the family.

The property is owned by a Palestinian, identified as Ahmad Abu Srour, and is located near Beit al-Baraka compound, which was illegally taken over by colonialist settlers several years ago, who claimed that they bought it from a Swedish company.

On Monday, August 6th 2018, Israeli settlers, escorting a bulldozer demolished two Palestinian homes at Beit al-Baraka church compound, despite the presence of a court order allowing the families to stay in their homes, according to the owner of the two homes, Ahmad Samara.

Beit al-Baraka, meaning “House of Blessing,” built 70 years ago, is a 38-dunam (9.5-acre) church compound located near the al-‘Arroub refugee camp, on the main road between Bethlehem and Hebron, opposite to Arroub refugee camp.

It used to serve as a hospital providing free treatment to people suffering from tuberculosis until it was shut down in 1983. Jewish settlers later fraudulently bought the compound from the church, through a fake company.

An American missionary, identified as Thomas Lambie, constructed the buildings after coming to Palestine in 1947. Lambie constructed a tuberculosis hospital on the site and was buried on the property after his death in 1954. Beit al-Baraka was illegally annexed to Gush Etzion colonialist block on October 1st, 2015.