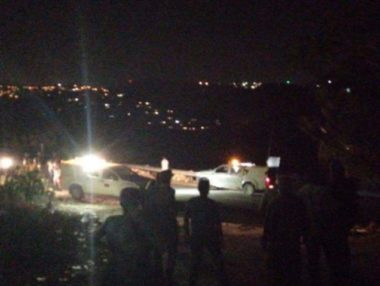 On Saturday evening, a group of fanatic illegal Israeli colonists, squatting on Palestinian lands near Bethlehem, south of occupied Jerusalem in the West Bank, and attacked several Palestinians, in addition to using fireworks against them, in al-Jab’a village, southeast of Bethlehem.

Thiab Masha’la, the head of the al-Jab’a Village Council, southwest of Bethlehem, said the attack was carried out by more than ten colonists.

He added that the assailant also used fireworks in assaulting the Palestinians before the locals intercepted their invasion and prevented from reaching its center.

The colonists then ran towards the eastern entrance of the village and stayed there for some time until the army arrived, and retreated to their colony.

On Sunday morning, a group of fanatic illegal Israeli colonialist settlers invaded a Palestinian orchard near the northern West Bank city of Nablus, before cutting and uprooting more than 60 olive trees.

Furthermore, Israeli soldiers forced a Palestinian farmer out of his own grove near the village of Burin, to the south of Nablus, in the occupied West Bank.

On the same day, the soldiers invaded a Palestinian olive orchard near Huwwara military roadblock, south Nablus, and forced a farmer out of his land.

The attacks are part of the dozens of violations targeting the Palestinian and their lands by both the soldiers and illegal colonialist settlers.