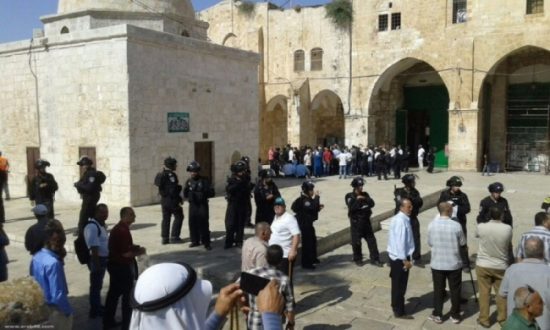 Illegal Israeli colonists stormed, on Wednesday, the Al-Aqsa compound in the Old City of occupied East Jerusalem, under the full protection of the Israeli police forces, the Palestinian News & Information Agency (WAFA) reported.

On a regular basis, illegal Israeli settlers are permitted to invade the Islamic holy site with full security, meanwhile, at the same time, the authorities restrict the entrance of Palestinian muslims wishing to enter the third holiest site in Islam.

A disproportionate number of Palestinians living in Gaza, the occupied West Bank and abroad are not permitted to visit the Al-Aqsa Mosque compound in Jerusalem, just one example of the occupation authorities’ use of collective punishment.

Israeli authorities allow the settlers to enter the compound twice a day, five days a week despite the site being a Muslim worship site under the guardianship of the Jordan-run Islamic Waqf Department.