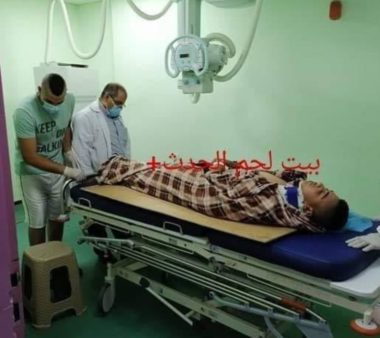 Eyewitnesses said the child, only fifteen years of age, was attacked by a group of colonists near the al-Khader Palestinian town, south of Bethlehem.

They added that the colonists first chased the child, identified as Wadea’ Fadi Salah, and pushed him down a cliff near his house in Abu Sood neighborhood in al-Khader.

The child suffered various serious cuts and bruises, and was rushed to a hospital in Bethlehem city.

Bethlehem is one of the main Palestinian areas of the West Bank where Israel continuously builds and expands its illegal colonies, and is subject to escalating violations by the colonists, and the soldiers.

The violations include the demolition of homes, the illegal confiscation of Palestinian lands, in addition to the repeated assaults against the Palestinians, their homes, lands and their holy sites.

On Thursday, Israeli soldiers demolished a Palestinian home in al-Khader, and a carwash facility in Teqoua’ town.

The construction and expansion of the illegal colonies in occupied Palestine constitute a war crime under international humanitarian law.