Including An Infant, Israeli Soldiers Injure Dozens Of Palestinians Near Nablus 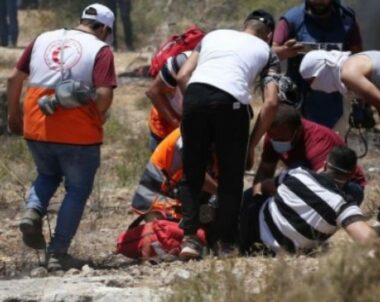 On Friday, Israeli soldiers injured many Palestinians, including an infant and his family, during the weekly processions against the illegal Israeli colonialist activities and ongoing military occupation, in Sorra, Beit Dajan, and Beita, near the northern West Bank city of Nablus.

The PRCS said the soldiers fired a barrage of gas bombs and concussion grenades, causing thirteen Palestinians, including an infant and his family in their home, to suffer the severe effects of tear gas inhalation.

The army also attacked protesters in Beit Dajan, east of Nablus, and fired many gas bombs and concussion grenades, causing several Palestinians to suffer the effects of tear gas inhalation.

Furthermore, the PRCS said the soldiers attacked a procession in Beita town, south of Nablus, shot one Palestinian with rubber-coated steel bullets, and caused eighteen to suffer the effects of tear gas inhalation.

The soldiers injured thousands of Palestinians during these protests and killed many others, including children.

On Friday evening, the Palestinian Health Ministry confirmed that Israeli soldiers shot and killed two children, Adel Ibrahim Adel Daoud, 14, Mahdi Mohammad Ladadwa, 17, and injured dozens of Palestinians near Ramallah and Qalqilia, in the northern and central parts of the occupied West Bank.