Including Seven Medics, Many Palestinians Injured By Israeli Army Fire In Gaza 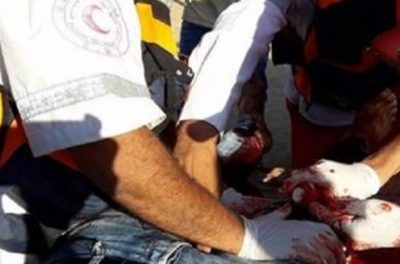 Palestinian medical sources have reported, Friday, that three young men were shot with live Israeli army fire, and dozens suffered the effects of teargas inhalation, including seven medics, during clashes that erupted along the border fence, in the besieged Gaza Strip.

The soldiers also shot one Palestinian, in his thirties, with a live round in her right leg, before local medics rushed him to the Al-Aqsa Hospital, in Deir al-Balah, in central Gaza.

Furthermore, soldiers stationed in the Nahal Oz military base, across the border fence, east of the Sheja’eyya neighborhood, in the eastern part of Gaza city, fired many gas bombs at Palestinian protesters, including some that directly struck three ambulances, causing seven medics to suffer the severe effects of teargas inhalation.