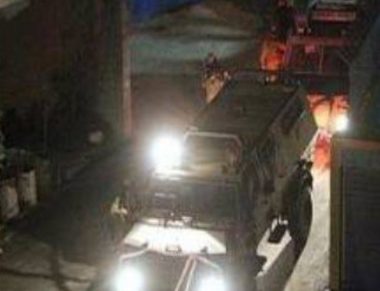 Upated: Israeli soldiers abducted, on Friday at dawn, seven Palestinians, including three siblings, and confiscated a car, in Ramallah, in central West Bank, and attacked protesters with live fire and rubber-coated steel bullets.

In addition, the soldiers invaded Rantis village, northwest of Ramallah, searched and ransacked many homes before abducting three siblings, identified as Ali, Mustafa, and Hamdan Khalaf.

Dozens of Palestinians protested the invasion and hurled stones at the army vehicles, while the soldiers fired live rounds, rubber-coated steel bullets, and gas bombs.

Also at dawn, the soldiers invaded Bethlehem city and nearby Husan town, south of occupied Jerusalem in the West Bank, and abducted two Palestinians.

On Thursday evening, the army released, a detained wounded young Palestinian man, identified as Abdullah Bassem Abu Bakr, from Jenin, in northern West Bank, after holding him captive for a month and a half.