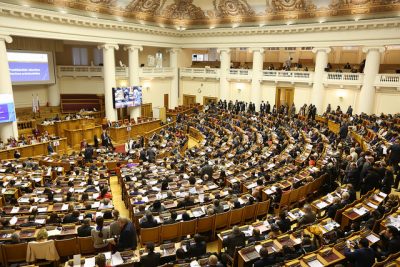 On Sunday evening, the Inter-Parliamentary Union (IPU) in its 138th session, in Geneva, Switzerland, voted to support the Palestinian people’s right to self-determination, to have a state of their own with Jerusalem as its capital.

The resolution counters a statement that Donald Trump made in December in which he unilaterally bypassed all peace agreements and negotiations and declared that Jerusalem is the capital of Israel – thus denying all Palestinian claims to their historic capital city.

The IPU is a forum made up of representatives from the national legislatures of 176 countries.

At their annual session in Geneva this week, they considered four resolutions regarding Palestine and Israel – three proposed by the Palestinian Authority, and one proposed by the Israeli representative.

The Palestinian Authority was joined by Kuwait and Bahrain in introducing three resolutions condemning the declaration by Trump of Jerusalem as the capital of Israel, as well as condemning the US decision to cut funding to the United Nations Refugee Works Agency, which provides food aid and schools to Palestinian refugees.

The Israeli representative responded with a resolution calling Iran a “terrorist state”. That resolution did not pass.

The three measures introduced by the Palestinian Authority did pass, despite the Israeli delegate’s meetings through the weekend to try to convince the delegations of Argentina, France, Russia, Mexico, Canada, Brazil and other countries to vote against the measure.

Israeli Prime Minister Benjamin Netanyahu issued a statement strongly denouncing the resolutions and claimed on that the council is “adopting resolutions that have lost touch with reality.”

He also said that the time has come to change the name of the Human Rights Council to the “council that adopts resolutions against the only democracy in the Middle East.”

For his part, Israeli “Defense Minister” Avigdor Lieberman called on Israel to withdraw from the council, adding that Israel’s membership with this council “grants it recognition, and harms the Jews.”