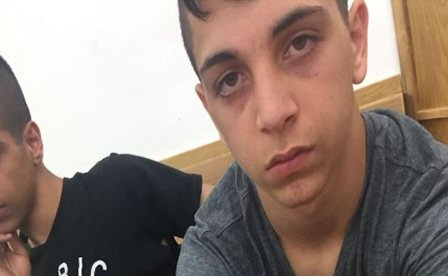 With bruises in the face, hands and back and blood congestion in the hands of Jerusalemite boy Muhi Majed Al-Rishq, it is clear that he has been subjected to assault in the interrogation room, at the police station in the Old City of Jerusalem.

Most Palestinians children and youth detained have been reported to be subjected to some kind of assault in Israeli interrogation centers.

The child Muhi Al-Rishq, aged 15, from Al-Saadiyeh neighborhood, in the Old City of Jerusalem, one of the victims of torture and ill-treatment by interrogators in the center of Qishla, was subjected to torture in order to extract a confession from him against minors and young Jerusalemites.

Lawyer Mahmoud Rabah said that Israeli interrogators take the detainees to areas located away from surveillance cameras, to be interrogated, beaten and tortured, to coerce them into admitting to violations they did not commit.

He further noted that Israeli interrogators assaulted the child Muhi al-Rishq during interrogation in Al-Qashala center. The assault reportedly left marks on his body, under his right eye, face and hands. Israeli police also tightened the handcuffs on his hands while they were taking him to court.

The lawyer noted that he filed a complaint to Mahash Center for Complaints against Israeli police, expressing his hope that action would be taken against the attacks against children, minors and other young people.

He stressed that whether the detainee is a minor or an adult, it is strictly prohibited to extract confession from them by using physical force or psychological violence.

He explained that the torture involves several varieties, which can involve both physical and psychological abuse. It is practiced in the Qashla police stations of the old town of Ouz, in Jabal al-Mukaber, and the Salah al-Din center. Usually, the interrogators exert more psychological pressure on the detainees.

Eight Palestinian minors from the Old City district of occupied Jerusalem reportedly faced a fierce Israeli onslaught, as forces stormed their family homes, ransacked them and, then, beating them in interrogation centers, to extract confessions.

The West Bank Magistrates’ Court released  five young men and women from the city’s Old City, last week, on condition that they be held under house arrest for 5 days, pay a NIS 1,500 bail, and sign a third party guarantee of NIS 5,000.

The head of the Committee overseeing families of Jerusalemite detainees,  Amjad Abu Assab, said that Israeli occupation authorities are carrying out a lot of unjust measures against the Palestinian people, especially children, and follow a policy of exchange in roles, on judicial, political and security levels.

About two and a half years ago, Israeli authorities adopted a series of laws against children, most notably allowing the interrogator to interrogate the child separately from his parents, and without consulting a lawyer.

Such legislation allowed Israeli courts a wide scope in issuing high sentences against children, for the most basic charges, and imposing high fines. They also allowed Israeli police to detain children under the age of 14, and to hold them in juvenile institutions, despite the fact that these laws violate international law and the Convention on the Rights of the Child, to which the Israeli occupation is signatory.

Abu Assab pointed out that occupation authorities violate international law and the rights of the child from the first moment of detention, from beating them in front of their families, in their homes, to starving and blackmailing  them during interrogation.

He stressed that all Israeli agencies used such practices under the claims of “fighting terrorism”.

About 6.000 Palestinian detainees reside in the Israeli jail and prison system, and most of the children were taken from Jerusalem, according to Al Ray Palestinian media agency.