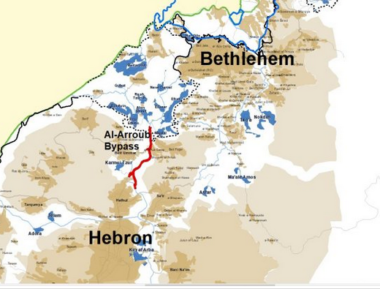 The Israeli authorities have approved the paving of two new roads to link with illegal isolated colonies, built on private Palestinian lands in the southern and northern parts of the occupied West Bank.

Israeli daily Haaretz said the approval was for two major road in the occupied West Bank, and added that it sets the ground for the annexation of large areas of Palestinian lands.

It stated that the “Civil Administration Office” has issued permits for paving the roads to the isolated colonies, and that the work is scheduled to begin this July.

Israeli Peace Now Movement said the “Subcommittee on Roadways of the Israeli Civil Administration Higher Planning Committee has approved on May 1st, construction permits for the paving of two bypass roads: the Huwwara Bypass Road south of Nablus and the Al-Aroub Bypass Road, south of Bethlehem.”

Palestinian official Ghassan Daghlas, who monitors Israel’s illegal colonialist activities in northern West Bank, said the Israeli side has officially informed the Palestinians of its decision to annex 406 Dunams in three villages near Nablus, to pave the bypass road.

Nasser al-Huwwari, the mayor of Huwwara town, near Nablus, told the Maan News Agency that %98 of the Palestinian lands are owned by Huwwara residents.

He added that the road would go through an-Najma area, to pass near the Palestinian Luna Park Recreation Center and Swimming Pools, and includes several bridges and junctions.

Al-Huwwari stated the Palestinians were given 60 days to file appeals with Israeli courts, and that the Israeli government is also planning more colonialist constructions that would be possible after the road is paved, and infrastructure is set.

Peace Now also said, “In early April, the defense minister (at that time Prime Minister Netanyahu), approved to begin the construction of the two bypass roads, and immediately afterwards, the head of the Civil Administration issued orders to confiscate hundreds of dunams of private Palestinian land for paving the roads.”

Huwwara Bypass – For the purpose of the road, an expropriation order was issued for 406 dunams of private Palestinian land from the villages of Burin, Huwwara, Beita, Awarta, Yasouf, Yitma and as-Sawiya.

The road is expected to serve only four settlements: Yitzhar, Itamar, Har Bracha and Alon Moreh, where just 7,132 settlers live. According to reports, the cost of the road, which is 5.5 kilometers long, is estimated at a quarter of a billion shekels ($69 million), or about NIS 35,000 per settler ($9, 750).

Al-Arroub Bypass – To build the road, an expropriation order was issued for 401 dunams of lands from Beit Ummar and Halhoul for a road of about 7 kilometers, south of Bethlehem (Read more on Al-Aroub Bypass road).

Peace Now stated that the work on the newly approved roads can start 60 after the annexation orders of the Palestinian lands are issued, on June 4th, and added that if landowners file petitions against the expropriation of their lands, the work could be delayed until a final ruling is made.

Peace Now: “These expropriations are part of the government’s continued capitulation to the settlers to build Israeli-oriented bypass roads throughout the West Bank. The settlers know very well that without good roads, the settlements will not be able to develop, and tactically demand that they be built “for security reasons.” This stated rationale masks the real goal behind these roads: to expand the settlements and to advance plans for annexing the West Bank at the cost of a two-state solution.”