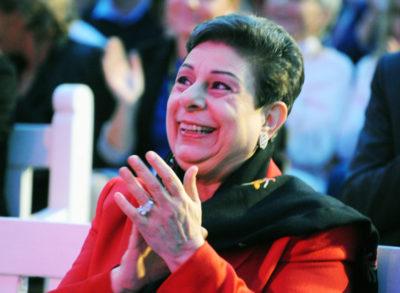 One of the top leaders in the Palestinian government, Dr. Hanan Ashrawi, has had her visa rejected by the U.S. government with no reason given for the denial.

Ashrawi has long been considered a moderate, tempered voice among the Palestinian leadership who is seen as both uncorruptible and steadfast in her support for Palestinian basic rights. In February of this year, in response to the death of an ill Palestinian prisoner in Israeli prison, Ashrawi stated, “Israel is a serial violator of human rights and its obligations under international humanitarian law, including the systematic use of torture and other inhumane treatment as well as medical negligence. It is high time for Israel’s brutality against Palestinian prisoners, illegally imprisoned inside Israeli territory, to be thoroughly and independently investigated.”

In response to the rejection of her visa, Ashrawi released a series of tweets that read as follows:

1/It is official! My US visa application has been rejected. No reason given. Choose any of the following: I’m over 70 & a grandmother; I’ve been an activist for Palestine since the late 1960’s; I’ve always been an ardent supporter of nonviolent resistance;

2/I’ve always struggled for human rights and against corruption; I’m basically an academic although I was elected to the PLC & PNC & the PLO Executive Committee; I studied for my Ph.D. in the US; I’ve been a frequent visitor there since then;

3/I’ve met (& even negotiated with) every Sec. of State since Shultz, & every President since George H. W. Bush (present administration excluded); I’ve been a vocal critic of this administration & its underlings; I believe in freedom of speech; I’ve always been searingly honest;

5/Most of all, I have no tolerance for the Israeli occupation in all its manifestations as a most pervasive form of oppression, dispossession & denial; I have no respect for the enablers of this inhuman condition nor for its apologists;

6/I have a tremendous sense of love & protectiveness for the people of Palestine wherever they may be & am constantly humbled by their resilience & persistence in spite of all their pain; I also identify & stand in solidarity with all those who are suffering any injustice.

7/I’m guilty of all of the above, & as such this administration has decided I do not deserve to set foot in the US. I just hope someone can explain this to my grandchildren & all the rest of my family there.

The rejection of Ashrawi’s visa comes a month after the U.S. State Department decided to deny a visa to Omar Barghouthi, known as a leader within the Palestinian campaign known as ‘Boycott-Divest-Sanctions (BDS) urging international pressure on Israel to get that country’s government to adhere to international law and respect the rights of Palestinians.

Although the U.S. State Department has said that it does not deny visas based solely on political views, critics say that it is clear that those are indeed the grounds for these visa denials. Both Barghouthi and Ashrawi have traveled to the U.S. many times before. Ashrawi spent several years as a doctoral student earning her PhD in the U.S., and has children and grandchildren who are U.S. citizens living in the U.S.

Both Barghouthi and Ashrawi received numerous visas to travel and speak in the U.S., through both Republican and Democratic administrations, and have never had visa applications rejected until the current Trump administration. Since nothing has changed in the situation of either one, international analysts say that it is clear that these rejections are based on political beliefs.

According to the Israeli newspaper Ha’aretz, a State Department official told their reporter, “Visa records are confidential under U.S. law; therefore, we cannot discuss the details of individual visa cases”, but added that U.S. law “does not authorize the refusal of visas based solely on political statements or views if those statements or views would be lawful in the United States.”

Ashrawi had a back-and-forth on Twitter with Jason Greenblatt, Donald Trump’s advisor on Israel.  In response to a tweet by Ashrawi in February criticizing U.S. policy toward the Palestinian people, Greenblatt responded on Twitter that Ashrawi would be welcome to come and talk to him at the White House.

But now, Ashrawi will not be allowed that chance, due to the U.S. State Department denying her visa with no reason provided.

Greenblatt spoke several days ago at the United Nations, rejecting calls for Palestinian equal rights and instead saying that the ‘peace plan’ that he and Jared Kushner have been drafting in secret will be rolled out within the next two weeks.

He stated that Israel’s security was of the utmost importance to the U.S., did not mention anything about Palestinians having rights, and stated that “I’m not a believer in boycotts but in engagement” – a reference to the worldwide movement to boycott Israeli products and businesses to try to pressure Israel to adhere to international law and the Fourth Geneva Convention.

Setting foreign policy via social media has never been a practice of the U.S. or any government prior to the current U.S. administration, but it has become commonplace in the Trump administration, as Donald Trump and his advisors continually roll out new, often contradictory, policies via Twitter on a nearly daily basis.