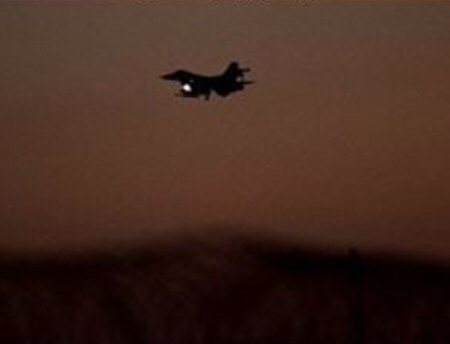 Christof Lehmann (nsnbc) : The Israeli army launched two attacks against Syrian Arab Amy (SAA) position within two days, claiming shells had been fired from Syrian-controlled territory into the Israeli occupied Syrian Golan heights. Israeli involvement and manipulations have, since 2013, created a “safe zone” for Al-Nusra and affiliated terrorists in the Golan, displacing UNDOF troops and establishing a several kilometer wide corridor through the disengagement zone for the insurgents. Israel has the openly-declared goal to permanently annex the resource-rich Golan Heights, in open violation of international law.

After army units succeeded in thwarting the wide-scale attack carried out by Jabhat al-Nusra terrorists on the surroundings of al-Baath city in Quneitra countryside, which inflicted heavy losses upon the terrorists, the Israeli enemy attacked a Syrian military position in Quneitra in a desperate attempt to support terrorist groups and raise their flagging morale.

The General Command also warned against the risks posed by such hostile acts and holds the Israeli enemy responsible for the serious repercussions if such acts reoccur under any pretext, affirming determination to crush terrorist groups which are the Israeli enemy’s proxy in the area.

Neither the Defense Ministry nor Israel’s Prime Minister differentiated between “Israel” and “Israeli-occupied Syrian territory”.

On Saturday, the Israeli army targeted two Syrian tanks which allegedly had fired into Israel and heavy machine gun positions. – More precisely, Syrian tanks had fired a number of shells into areas in the Israeli-occupied Syrian Golan. It was this incident that “provoked” Israel’s alleged “retaliation”.

On Sunday, the Israelis targeted two artillery launchers and an ammunitions truck, in Syrian-controlled territory. after several Syrian artillery projectiles landed in the Israeli-occupied Syrian Golan Heights without causing any harm or damage. A similar incident happened on Saturday. after a number of shells were fired into the Golan from Syrian-controlled positions.

On Sunday afternoon, the Israeli Ministry of Defense used its Twitter account to state: “In response to several Syrian projectiles launched towards Israel IDF targeted 2 Syrian regime artillery positions & an ammunitions truck”. Two hours prior to that, the army admitted that a number of Syrian shells had hit the Golan heights without causing damage.

Not differentiating between Israeli occupied territory and Israel, Israeli Prime Minister Benjamin Netanyahu stated, earlier on Sunday, “Our policy is clear: We will not tolerate any spillover or trickle, whatsoever, neither mortars or rockets, from any front”.

The incidents occurred within the context of recent U.S. attacks against Syrian troops in the tri-border area of Iraq, Jordan and Syria – a corridor of control that fits seamlessly with Israeli controlled Syrian territories. Both U.S. and coalition as well as Israeli maneuvers in the region are apparently also aim to combat the Iran -Syria – Hezbollah axis.

In September of 2016, Israeli occupation authorities in the occupied Syrian Golan Heights, for the first time, demolished a home, claiming it was built without permission. The demolition and claims the house was built without permission violates Israel’s obligations under international law, according to which an occupying power must assure that administration in occupied territories adhere, to the greatest possible degree, to the law of the occupied country’s territory.

Israel has, however, enforced new Hebrew as official administrative language, denies building permits and engages in other violations of international law that aim at oppressing the Arab population and culture and Syrian administration in the occupied Golan.

Al Marsad, which is the only human rights organization that operates in the Golan, reported that hundreds of Israeli police accompanied by bulldozers demolished the home of Bassam Ibrahim in Majdal Shams, the largest town in the Israeli occupied Golan. In a statement, Al Marsad said:

“This is the first time that the Israeli authorities have demolished a home in Majdal Shams. … The destruction of this home marks the adoption of a new systematic policy of home demolitions by the Israeli authorities in the remaining Syrian villages in the Occupied Syrian Golan. The Syrian owners of dozens of other homes have been threatened with similar action. … As a result of the severe restrictions imposed by Israeli planning and construction committees, it is close to impossible for the Syrian population to obtain the necessary building permits. Therefore, the Syrian population is forced to build homes without building permits, as this is the only way to meet their housing needs given unprecedented levels of overcrowding.”

The rights organization accused Israel of preventing the Syrian population from building in their cities while encouraging and facilitating the construction and expansion of illegal Israeli settlements in the Golan Heights.

Israel occupied the Syrian Golan Heights after the June 1967 war. Israel’s continued occupation violates international law and has been opposed by several UN General Assembly resolutions. None of the UN Security Council’s five permanent members (P5), however, has taken any tangible steps that would be consistent with their mandate and obligation to end the illegal occupation.

The failure of UN Security Council and the UN system as a whole has emboldened Israel to declare that “Israel and the Golan are part and parcel”. In June 2013 an Austrian United Nations Disengagement Observer Force (UNDOF) officer explained that Israel was maintaining a joint intelligence and operations room with “Syrian rebels”. Warnings by Syrian UN Envoy Dr. Al-Hamwi, in July 2013, to the effect that Israel commits methodical crimes in the Golan were ignored by the UN Security Council (UNSC).

By mid-2013, reports about the Israeli involvement in the war on Syria via the Israeli occupied Syrian Golan and in the UNDOF controlled neutral zone slowly made it to some of the Western and Arab media. The administration of Israel’s PM Benjamin Netanyahu transformed that, what could have developed into a PR nightmare, into a propaganda success when Netanyahu visited an Israeli field hospital for “Syrian opposition fighters”.

Netanyahu told Israeli TV viewers and international press that the field hospital showed the true, humanitarian face of Israel. The PM did not mention a word about Israel’s direct and indirect military support of Jabhat al-Nusra and other al-Qaeda associated brigades. (see video)

Also in 2013, Israeli machinations and cooperation with Al-Qaeda affiliate Al-Nusrah, resulted in the withdrawal of UNDOF troops from a 12 – 16 kilometer wide corridor in the disengagement zone. (see map below)

The corridor facilitated direct logistic support of Islamist insurgents in Syria via this corridor. Russia’s Deputy Permanent Representative to the United Nations, Pyotr Ilyichev, urged the international community to use its influence on anti-Syrian militants in the Golan Heights to prevent the phase-down of the UNDOF peacekeeping mission.

However, the lip-service of the deputy representative did not manifest in a Russian sponsored UN Security Council resolution. In February 2014 then Israeli Foreign Minister Avigdor Lieberman publicly called for “settling the Israeli sovereignty over the Golan Heights within the framework of the Israeli – Palestinian negotiations” adding that “part of this comprehensive bargain has to cover an understanding between Israel, the international community and the USA” and adding that “the Golan is part and parcel with Israel”.

In May 2014, Israel denied Syrians in the occupied Golan Heights voting rights. during Syrian elections. Again, the United Nations failed to respond. In 2015 Israel intensified its annexation program, inspired by the discovery of substantial hydrocarbon resources in the Golan Heights. US interests involving Genie Energy and celebrities including Dick Cheney are involved in plans to develop the resources.

Prior to talks between Israeli Prime Minister Benjamin Netanyahu and Russian President Vladimir Putin, in April 2016, Netanyahu asserted that “Israel will never relinquish the Golan Heights”.

Despite all critique of U.S. support for Israel and Israel’s aggressions against Syria in Russian State media, also in 2016, Russian President Vladimir Putin, the President of a permanent UN Security Council member State was spectacularly silent about Israel’s “red lines”. In June, 2016 Syrians in the occupied Golan launched protests against Israel’s annexation plans. The international press was spectacularly silent. None of the five permanent UNSC member States officially responded to the first “home demolition”.