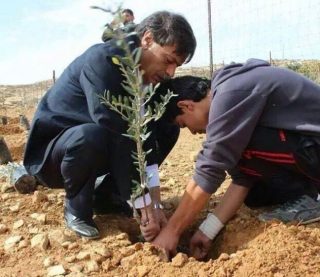 The Mahash police investigation unit, run by the Israeli Justice Ministry, has decided to close the investigation into the murder of Palestinian government minister, Ziad Abu Ein, who was killed by the army nearly 18 months ago.

The unit decided that although there were “some problematic conducts” by the Border Guard police officers, there will be no legal action, after ruling the death as a result of a heart attack.

Mahash did not conduct a thorough investigation into the death of Abu Ein, and did not collect testimonies, but only said there were some “problematic behaviors,” by the officer who kept assaulting Abu Ein, yet, he reportedly “was not the cause of his death.”

Abu Ein was killed on October 10th 2014, after Israeli soldiers and police officers attacked nonviolent protesters, who were also planting trees, in Turmus Ayya town, in the central West Bank district of Ramallah.

The soldiers assaulted the protesters, and fired many gas bombs at them, before an officer chocked Abu Ein after he already inhaled gas.

The officer choked the minister until he fell onto the ground, and died shortly after that.

An Israeli army soldier told Mahash that he saw a man (Abu Ein) falling onto the ground after the officer pushed him, and that he told the officer to leave and stay in the military vehicle in order to avoid further tension.

He added that, despite the orders that were given to the officer, he saw him again in direct contact with the protesters, and informed the immediate officer to remove him.

In addition, a soldier said he saw an officer pushing Abu Ein while holding him from his neck, and that the same officer was restoring to excessive force against the protesters.

Abu Ein family filed an appeal through Yesh Din and Adalah human rights and legal groups, in order to challenge the Israeli decision.

It is worth mentioning that a team of Palestinian and Jordanian doctors participated in the autopsy that was led by Israel.

The head of Civil Affairs Committee of the Palestinian Authority in the West Bank, Hussein Sheikh, said Abu Ein died due to being repeatedly beaten, and due to teargas inhalation in addition to being left without the urgently needed medical treatment.

Sheikh added that the autopsy results implicate the army in the murder of Abu Ein, and added that the soldiers did not only repeatedly attack him, but also delayed the medics who rushed to provide him with the needed first aid, especially since he suffocated after inhaling gas fired by the soldiers before he was choked.

He also stated that the Israeli forensic specialist who participated in the autopsy in Abu Kabeer Center in Abu Dis, east of occupied Jerusalem, agreed with the outcome that Abu Ein was killed, but refused to sign the official report. Only the Palestinian and Jordanian doctors signed it.

In early January 2015, a military investigation headed by the Israeli Army’s General Officer in Central Command Nitzan acquitted the soldier of all charges and absolved “of wrongdoing” in the late minister’s Death.