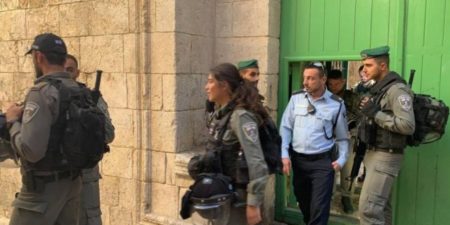 PNN sources said that the Israeli police served an order and closed the office of the Directorate of Education, banned the activities of Palestine TV in occupied Jerusalem, and arrested the director of the Arab Health Center in Jerusalem’s old city.

Occupation authorities have drawn up a decision signed by the Israeli Minister of Internal Security Gilad Ardan, to close the mentioned institutions for six months.

In addition, Israeli soldiers abducted the Director of Education in Jerusalem, Samir Jibril, and closed down the office based in the Orphans School, in in the Old City district, confiscated its keys, and detained the staff of the school for several hours inside the mosque.

The Ministry of Education said in a statement, on Wednesday, that this attack, which coincides with International Children’s Day, constitutes flagrant violation of all international conventions, customs, rights, charters, and laws, especially the right to education, international humanitarian law, and comes as a clear targeting of the sanctity of educational institutions and an attempt of the occupation to control the educational system in Jerusalem.

The ministry pointed out that this directorate office serves about 100,000 students and follow-up affairs, and that the closure will leave dozens of schools and thousands of students without follow-up.