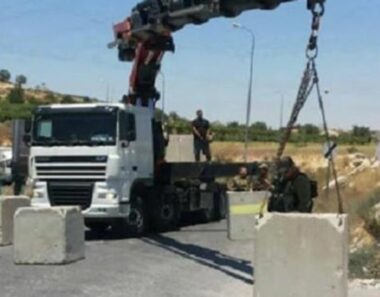 Israeli soldiers continued, Monday, the closure of the al-Mughayyir Palestinian village, northeast of the central West Bank city of Ramallah, for the fifth consecutive day, preventing the residents from entering or leaving it.

Amin Abu Alia, the mayor of al-Mughayyir, said the soldiers closed the entrances of the village with sandhills and concrete blocks, forcing the Palestinians to take longer, unpaved roads to enter or leave the village on foot to reach their destinations, including work and education.

He added that the villagers held a massive protest, two days ago, demanding the army to lift the siege on their community, before the soldiers fired live rounds and gas bombs at them, causing dozens to suffer the effects of teargas inhalation.

It is worth mentioning that the soldiers have escalated their invasions and violations against the villagers in al- Mughayyir, and on December 4, 2020, the army killed a child, identified as Ali Ayman Abu Alia, 14, during the peaceful procession.