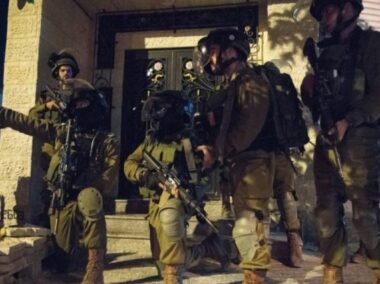 Israeli soldiers abducted, on Monday at dawn, at least sixteen Palestinians from their homes in several parts of the West Bank, including occupied Jerusalem, during violent invasions of dozens of homes across the occupied territory.

The soldiers also released six Palestinians, who were abducted Sunday, after ordering them under house arrest.

They were among many Palestinians who were assaulted and detained by the soldiers, after the army invaded large areas of Palestinian lands, and attempted to uproot them in Wadi ar-Rababa area in Silwan town, south of the Al-Aqsa Mosque in occupied Jerusalem before the locals managed to intercept and stop them.

The soldiers also fired live rounds, rubber-coated steel bullets, and gas bombs at locals who protested the invasion, and hurled stones at the army jeeps.

In Ramallah, in central West Bank, the soldiers invaded the al-Jalazoun refugee camp, north of the city, searched and ransacked many homes, and abducted Ala’ Qassem, Mohammad Eyad Safi, and Mohammad al-Jobeidi.

The soldiers also invaded the al-Khader town, south of Bethlehem, searched homes, and summoned Qussai Ali Issa, 39, for interrogation in Etzion military base and security center, south of the city.

On Sunday evening, the soldiers chased Tamer Rami Hammad, 16, and abducted him from a shop in ‘Aida refugee camp, north of Bethlehem, in addition to firing many live rounds at Palestinians who protested the attack.