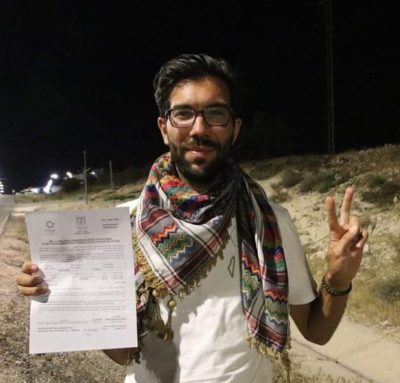 The Israeli Border Authority denied entry to a Swedish peace activist, who started walking to Palestine eleven months ago to raise awareness about the Israeli occupation, and the suffering of the Palestinian people.

The peace activist Benjamin Ladraa started his walk on August 8th, 2017, with the aim of informing the world about the situation in Palestine and spread awareness about the Israeli military occupation.

His walk also marked the centennial of the Balfour Declaration of 1917, in which Britain pledged a Jewish homeland in Palestine during the British mandate and occupation of the country.

After being denied entry, he said the officers at the Israeli-controlled crossing with the West Bank interrogated him for six hours, and told him that they believe “he was lying during interrogation,” and that “he would be participating in the protests in Nabi Saleh village,” near Ramallah.

The Israelis didn’t allow me to enter Palestine. I was interrogated for about six hours before they told me I was denied entry.

On this day it has been eleven months of walking and speaking about the human rights violations under the occupation. Now ask yourself why the Israeli state fears one Swedish man so much that they didn’t allow him to enter the country they are occupying. This is the power of activism.

On July 4th he wrote: Tomorrow I will make the final distance of my journey and arrive at the border of occupied Palestine. There is a big probability that the occupying Israeli soldiers will not let me enter Palestine so i have a favor to ask of everyone if this happens.

My journey has been about raising awareness about the human rights abuses committed under occupation and the media is a very powerful tool for spreading awareness. If they don’t let me in tomorrow it is a very good opportunity to try and get the media around the world to talk about how Israel is blocking human rights activists from entering Palestine.

So, I need everyone to contact as many newspapers, TV stations, News Agencies etc. as possible and share this story. What I did on my walk was to Google ‘country name + media’ and try to find a phone number or email to all the media outlets in all the countries I was walking through. So please be ready on Thursday evening and Friday to see if they didn’t let me in and let the world know that they are hiding their crimes by not allowing people that would bear witness.