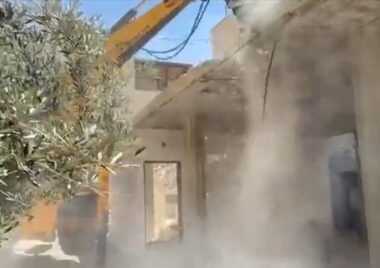 The Israeli occupation authorities in the occupied Palestinian capital, Jerusalem, forced a Palestinian family to demolish its own home in the at-Tour town, east of the city.

Media sources said the City Council in occupied Jerusalem issued a 200.000 Shekels fine that the family will be forced to pay if it does not demolish the property at its own expense.

They added that the home, a three-story building, provided shelter to 21 Palestinians from the local Abu Ghannam family.

It is worth mentioning that this is the second time Israel demolishes the building, as it was first demolished in the year 1994.

The Israeli authorities allege the demolition orders were made because the family did not obtain a construction permit.

Israel’s policy of home demolitions is an illegal act of collective punishment that violates International Law and various international treaties.

In related news, the soldiers demolished an under-construction school in the Salam suburb between Shu’fat refugee camp and ‘Anata town, northeast of Jerusalem.