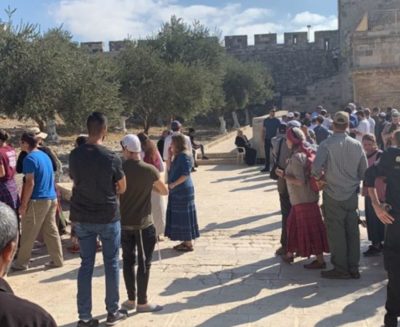 The Israeli occupation authorities have imposed a strict siege on the occupied West Bank and the Gaza Strip, starting on Saturday night at midnight and ending on Tuesday night at midnight, during the celebration of the Jewish New Year (Rosh Hashana).

All of the border crossings leading to the West Bank and the besieged Gaza Strip have been closed, while the Israeli army has also imposed many roadblocks across the occupied West Bank.

In addition, the Israeli police deployed more units in occupied Jerusalem, especially on roads and alleys leading to the Al-Aqsa Mosque, preventing dozens of Palestinians, especially young men, from entering the holy site.

The restrictions on entry into Al-Aqsa include Palestinian men with Israeli citizenship, while a few women were allowed into the holy site after the soldiers and the police held their ID cards as a precondition of entry, to collect them once they leave.

It is worth mentioning that the severe restrictions on the entry into the Al-Aqsa Mosque and its surrounding areas are taking place Israeli paramilitary settler leaders and Israeli officials are calling for massive provocative tours into the holy site, to celebrate the Jewish new year.

On Sunday morning, at least 120 illegal Israeli colonial settlers invaded the courtyards of the Al-Aqsa Mosque, through the al-Magharba Gate, while the soldiers removed the Muslim worshipers to facilitate these provocative tours. The invasion was led by Israeli Minister of Agriculture Uri Ariel and Likud Member of Knesset Yehuda Glick. It is worth mentioning that fanatic groups in Israel have created a greeting card to be used in celebrating Rosh Hashana showing an image of the Al-Aqsa Mosque compound completely vacant of any mosque or Islamic structure, with the Mosque (the third holiest site in Islam) “replaced” on the card’s image with a Jewish temple.

This is part of their openly-stated mission to demolish Al-Aqsa and build a Jewish temple in its place. Many Ministers of the current interim government headed by Benjamin Netanyahu frequently participate in the provocative tours into Al-Aqsa, and support the idea of demolishing it to “rebuild the temple” that was demolished by the Romans over 2000 years ago.