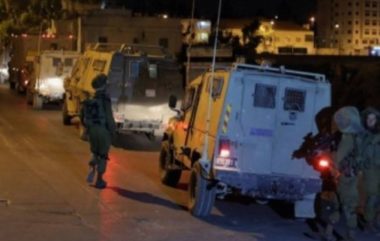 Updated: The Palestinian Prisoners’ Society (PPS) has reported that Israeli soldiers abducted, on Sunday at dawn, seventeen Palestinians, including former political prisoners, from their homes in several parts of the occupied West Bank.

The PPS said the soldiers invaded and violently searched dozens of homes, and other property, across the West Bank, and interrogated many Palestinians while inspecting their ID cards.

It added that the soldiers also abducted Mahmoud Mustafa Mardawi, from Arraba town, southwest of Jenin, and Khaled Bassel Bazzour, from Raba village, southeast of Jenin, after invading their homes and ransacking them.

The soldiers also abducted Maher al-Hroub, a member of the local committee for coordination between political parties, from his home in Balata refugee camp, east of Nablus.

In Awarta village, south of Nablus, the soldiers abducted Mohammad Sa’id and Nabeeh Awwad, from their homes, in addition to Ayman Haj Mahmoud, from Beit Forik town, east of Nablus. The three are former political prisoners.

In Tulkarem, in northern West Bank, the soldiers abducted Ala’ Zoheir al-Jayyousi, 40, from his home in the al-‘Iskan neighborhood, east of the city, and confiscated his car.

In Bethlehem, south of occupied Jerusalem, the soldiers abducted Odai Makhlouf Zawahra, 20, from his home in the al-Karkafa area, in the center of the city.

In Nahhalin town, west of bethlehem, the soldiers serched homes and abducted two siblings, identified as Ammad Mohammad Shakarna, and his brother Khalil.

The soldiers also invaded Kobar town, north of the central West Bank city of Ramallah, and searched many stores, in addition to a few abandoned homes.

The soldiers also invaded Birzeit town after withdrawing from Kobar and fired many gas bombs and concussion grenades at Palestinian protesters.

Similar protests took place after the soldiers invaded the villages of Deir Abu Mashal and Nabi Saleh, northwest of Ramallah.