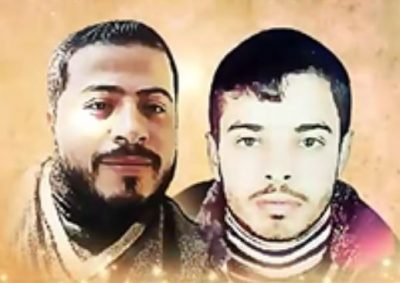 The head of the Palestinian Detainees and Ex-Detainees Committee Issa Qaraqe has reported that Israel is threatening to fore-feed two detainees, who are ongoing with their hunger strikes they started 65 days ago.

Qaraqe’ stated that the two detainees, Anas Shadeed and Ahmad Abu Fara,  from Hebron, in the southern part of the occupied West Bank, are demanding an end to their illegal and arbitrary Administrative Detention, without charges or trial.

In a press release Saturday, Qaraqe held Israel, its legal and security systems, responsible for the lives of the detainees, and called on the international community to intervene and stop the Israeli violations against them.

He added that Shadeed and Abu Fara are facing serious deteriorations in their health conditions, and that Abu Fara was moved to an intensive care unit at an Israeli hospital.

The two detainees could die at any given moment, but are determined to continue their hunger strikes, protesting being illegally held without charges or trial, the official stated.

Qaraqe called on the International Red Cross to closely and continuously monitor the conditions of the two detainees, currently at the Assaf HaRofeh Israeli medical center, and are facing bad treatment and ongoing violations by the Israeli guards.