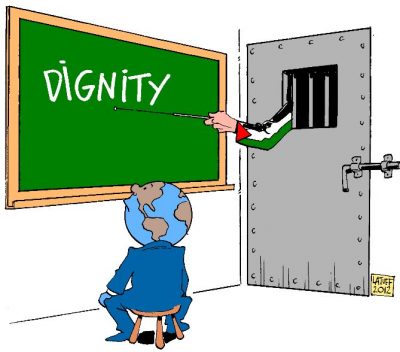 The Israeli Prison Authority has isolated all hunger striking Palestinian detainees, canceled all family visits in addition to illegally confiscating all their belongings, including clothes except for what they are wearing.

The head of the Palestinian Prisoners’ Society (PPS) Qaddoura Fares has reported that Israel has officially informed The Red Cross of the cancellation of all visits to hunger striking detainees, as a “disciplinary measure.”

Fares added that the Prison Authority has also transferred dozens of detainees from the prisons they are held at, to various detention centers and placed many in solitary confinement, in addition to isolating the rest in one section.

The International Red Cross said that it informed the families of Israel’s decision to cancel all visits until further notice, in addition to the confiscation of their clothes and belongings, and isolating them in their rooms.

It added that Israel has also installed a field clinic in the Negev desert to use for placing the ailing hunger striking detainees after deciding not to move any of them to Israeli hospitals.

Also, the prisons, where the detainees have access to TV, had their satellite receptions blocked from all Palestinian and Arab TV stations.

Furthermore, the Palestinian Detainees’ Committee and the Palestinian Prisoner Society have reported that the prison authority in Gilboa’ Israeli prison has prevented the lawyers from visiting with hunger striking detainees.

They also said that the Israeli authorities have declared a state of emergency in all prisons since the hunger strike started, Monday, under the pretext that the detainees “will not be able to walk or move to the visitation rooms and sections.”

The head of the Palestinian Detainees’ Committee, Issa Qaraqe, said that the Israeli Prison Authority has “justified” denying all visits, including the lawyers, by declaring what it called “state of emergency.”

Furthermore, Israeli has moved at least 35 detainees from Section 11 to Section 13, in Nafha Israeli prison, in addition to transferring what it regards as “strike leaders” to various other prisons, and forced many of them into solitary confinement.