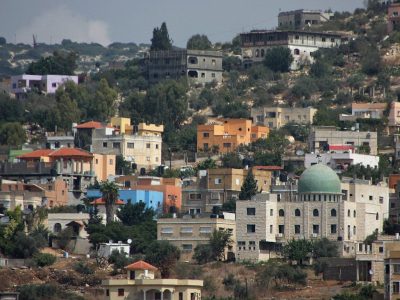 The Israeli army announced Saturday that it plans to recommend that the Israeli government split the village of Barta’a in two, after a vehicular collision on Friday that resulted in the deaths of two Israeli soldiers. Palestinian family members of the alleged attacker contend that it was a car accident, not an attack.

But despite the confusion about Friday’s incident, the Israeli army appears ready to use it as an excuse to move the Israeli Annexation Wall into the middle of the village of Barta’a in order to exclude Palestinian residents of the village from Israel.

The driver of the vehicle that struck and killed the Israeli soldiers, Ala’ Rateb Abdul-Latif Qabha, is from the village of Barta’a, which is located on the Israeli side of the Annexation Wall. But after the deaths of the two soldiers, the Israeli military is recommending moving the Wall to split the village in two, with the eastern half inside the West Bank, and the west half inside of Israel.

Qabha was wounded in the vehicular collision, but instead of being taken to the hospital, he was abducted by the Israeli military and taken to a military base for interrogation. He will likely be charged in an Israeli military court for ‘terrorism’ because the two soldiers died in the collision.

The Israeli military has vowed to demolish the family home of Qabha, and has already revoked the work permits of 65 members of the extended family of Qabha, as forms of collective punishment against the family of the alleged attacker. The Israeli government carries out punitive home demolitions against the family homes of nearly 100% of Palestinians suspected of attacking Israelis. These demolitions are carried out before any trial has taken place in these cases.