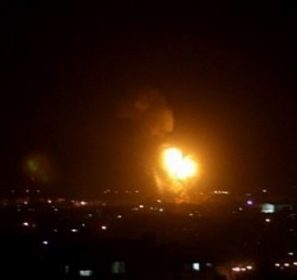 The Israeli air force carried out, on Saturday at dawn, a series of air strikes targeting a number of sites, believed to be run by armed resistance groups, in different parts of the besieged Gaza Strip. The army said a shell was fired from Gaza, on Friday at night.

Media sources in Gaza have reported that the air force fired several missiles into two sites, run by the Al-Qassam Brigades, the armed wing of Hamas, south of Gaza city, and a blacksmith workshop in Gaza’s Zeitoun neighborhood.

Another strike targeted Qassam sites in Beit Lahia and Jabalia, in addition to a shed near the Agricultural School, east of Beit Hanoun, in the northern part of the Gaza Strip. The strikes caused excessive property damage.

Israeli media said that a shell was fired from Gaza, just after 11 before midnight, and landed in the Negev town of Sderot, causing damage to a kindergarten, adding that the “Red Alert” siren system was sounded, on Friday evening, in Sderot.