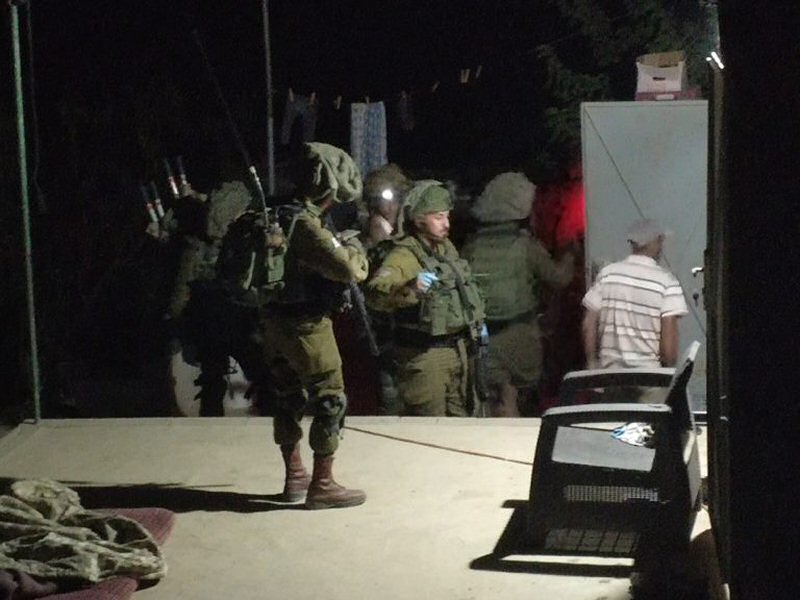 Masafer Yatta is a collection of over 20 villages near Hebron, deep in the south of the West Bank. Most of the Palestinians who live here raise livestock for a living; some are Bedouins, who once traveled with their camels and flocks across the dry and rugged hills, before Israel invaded in 1967 and occupied the area. Despite archeological excavations showing villages have been there since the early Roman and Byzantine era, the Israeli army declared the area a live firing zone in the 1970s and announced plans to demolish most of the villages. While Palestinians in Firing Zone 918 are forbidden from driving cars or possessing any kind of construction material, Israeli settlers in the settlements of Maon, Avigal, and Susya, illegal under international law, continue to build new houses and farms, and are free to travel in and out of the area.

On September 11th 2019, from 0:00 to 4:00 AM, Israeli soldiers raided multiple villages, breaking into homes, forcing sleeping children and parents outside of their houses and searching rooms, cupboards and fridges, as well as cars and wells, damaging villager’s belongings and terrorizing local residents. The soldiers refused to show residents a warrant or give a reason for the indiscriminate searches; residents say their villages are often used as a training ground for new recruits.

At 9:00 AM, 4 bulldozers and excavators, from JCB, Hyundai, and Volvo, and a Scania loading truck, together with dozens of IDF soldiers, Border Police, and Civil Administration agents arrived in the village of Mufakara, a tiny hamlet of approximately 50 inhabitants from the Hamamda clan. 4 structures were demolished and 2 families displaced, including a widow, her 6 daughters and one son. Residents of Mufakara said it was the 5th demolition in their village alone this year; one family had their home, demolished 3 times in 9 months. Civil administration agents also cut and confiscated a water pipe bringing water from At-Tuwani to Mufakara. This is not the first time Israeli Civil Administration has deprived villagers in Mufakara of access to water, a basic human right; Israeli human rights group B’Tselem reports that after having running water for just 6 months, Israeli forces destroyed and confiscated 6 kilometers of piping in February this year. The IOF also confiscated a car owned by the Massafer Yatta Village Council. 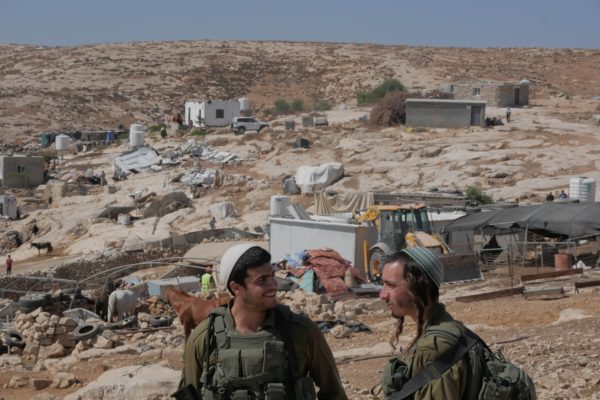 Israeli soldiers at the scene of home demolitions in Mufakara.

The IOF also demolished the bathroom of a family living inside a cave passed down for generations, . 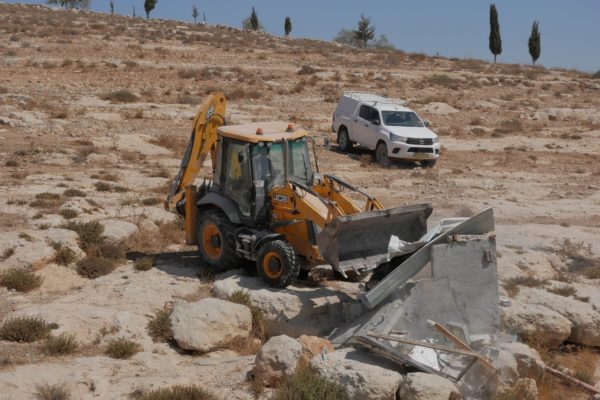 In the nearby village of Khallet Ad-Dabe’a, Israeli forces and Civil Administration demolished the houses of a family with 6 children and their uncle’s house. A relative of the family that lost their home was violently assaulted by Israeli soldiers after running past them towards the house, and was hospitalized with multiple injuries. Two Palestinians, head of the At-Tuwani Village Council, Mohammad Rib’ey, and Bakr Fadel Rib’ey, were assaulted, then arrested by the IOF. They were released without charge later in the day. 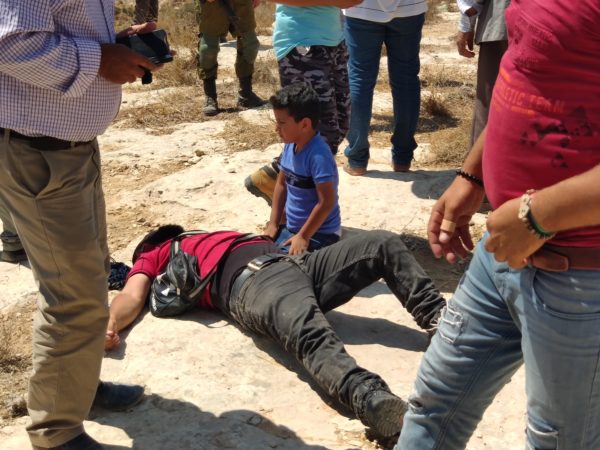 Relative of the family that lost their home, with his son, after being attacked by Israeli soldiers. He was later hospitalized for multiple injuries.

At the same time as the home demolitions, the Israeli army used excavators to dig holes and pile boulders and rubble onto a key road, cutting off 15 villages from the regional hub of Yatta. For some of these villages, alternative routes to Yatta will turn a 30 minutes trip into one that takes 4-5 hours, much of it through unpaved dirt roads.

Many of the houses demolished on Wednesday were, in fact, built with funding from the EU and international NGOs, as well as the road, which locals say was repaired with EU funding after it was previously damaged by Israeli forces. Regavim, an extremist far right settler group which lobbies for demolitions and against EU development projects in Palestine, is highly active in and around the illegal Israeli settlements in Masafer Yatta. According to the United Nations Office for the Coordination of Humanitarian Affairs, humanitarian organizations currently providing assistance to communities in Masafer Yatta are impeded by demolition orders “against the items provided”, as well as confiscation of organisations’ vehicles and equipment, and restriction of access to the area.

The Israeli government defends such demolitions by arguing that the houses were built without the legally required permits. A quick look at the numbers, however, show the virtual impossibility of obtaining a housing permit under Israel’s apartheid system. In a 2014 report by the World Bank, only 1.6% of Palestinian housing permit applications were approved; Israeli Civil Administration confirms that from 2008 to 2016, 66 Palestinian applications for construction were approved, while 12,763 Israeli settlement construction applications were approved.

To put that into numbers, an Israeli settler is 193 times more likely to have his application approved than a Palestinian.

Wednesday’s demolitions marked the first demolitions in 1 month and 8 days. The fact that such an extensive round of demolitions occurred just 6 days before Israelis vote in legislative elections did not go unnoticed, as Netanyahu, facing corruption charges and failure to form a government, tries to secure the settler and pro-Occupation vote. With both major Israeli parties declaring their intention to continue illegal settlement growth, and demolition orders pending on 26 of the 28 villages and hamlets in Masafer Yatta, the Israeli apartheid and ethnic cleansing of Masafer Yatta looks set to continue.

11 year old Ali asks Israeli soldiers why they came to this land, after being forced out his home and having to watch bulldozers destroy his family’s house: