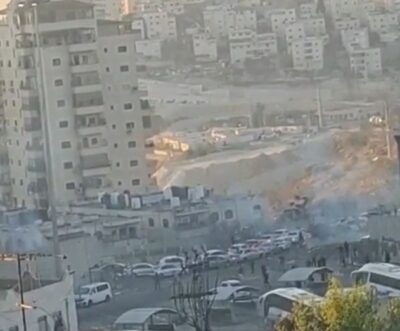 On Tuesday dawn, Israeli soldiers abducted a Palestinian man and his son from Anata town and continued the siege of Shu’fat refugee camp, northeast of the occupied Palestinian capital, Jerusalem, in the West Bank.

Many army vehicles invaded Anata before the soldiers stormed, ransacked a few homes, and interrogated many Palestinians while inspecting their ID cards.

Local sources said the soldiers abducted Jamal Tamimi, and his son Khaled, after invading their homes and searching them, causing damage.

Furthermore, the Israeli army continued the strict siege in Anata and Shu’fat refugee camp, and earlier Tuesday, stormed a home for the Tamimi family and took measurements of the property in preparation for demolishing it.

Dozens of Palestinians protested the invasion before the soldiers fired a few live rounds and a barrage of gas bombs at the protesters and surrounding homes, causing many Palestinians to suffer the effects of tear gas inhalation.

The area has been subject to the constant siege, invasions, searches of homes, and abductions of many Palestinians since Saturday evening after an Israeli soldier and an armed civilian guard were shot by a Palestinian at a military roadblock near Shu’fat.

On Sunday morning, the Israeli army announced the death of the soldier, Noa Lazar, 18, from Bat Hefer town in the northern part of the country.

On Monday, the Palestinian Health Ministry confirmed the death of a child, Mahmoud Mohammad Sammoudi, 12, from Al-Yamoun town, west of Jenin in the northern West Bank, who, on September 28, was shot and seriously injured by Israel army fire when the soldiers also killed four young Palestinian men in Jenin and Jenin refugee camp.