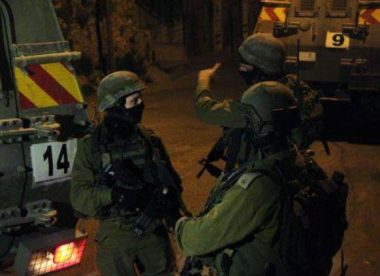 The Palestinian Prisoners Society (PPS) said that Israeli soldiers have abducted overnight and at dawn Thursday, thirteen Palestinians, including three children, in different parts of the occupied West Bank, including Jerusalem.

The Tulkarem office of the PPS, in the northern part of the West Bank, said the soldiers invaded many homes in the district, and abducted five Palestinians, identified as Sanad Abu Shanab, Ahmad Fares al-Jayyousi, his brother Fares, Fawwaz Rashid al-Jayyousi and Tareq Mohammad Abu Leimoon.

The Abu Shanab family said the soldiers assaulted their son in front of them, causing various cuts and bruises, and took him to an unknown destination.

In Qalqilia, also in the northern part of the West Bank, the soldiers invaded and searched many homes and abducted a former political prisoner, identified as Saber Mohammad Daoud, 42, who was previously imprisoned for 4.5 years.

Owners of some of the invaded homes have been identified as Mo’taz Abdul-‘Al, Jaber Oweiss, Nasser Oweiss and Monir Oweiss.

Furthermore, the soldiers abducted a former political prisoner, identified as Mohammad Allan, from Nablus, but released him later.

In Hebron, in the southern part of the West bank, the soldiers abducted two Palestinians, identified as Zeid Majed al-Ja’ba, 23, and Ahmad Abu Jouda.

Furthermore, the soldiers invaded several homes in Arraba town, southwest of the northern West Bank city of Jenin, including the homes of two former political prisoners, and confiscated electric equipment.