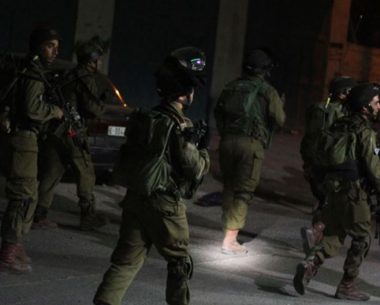 Israeli soldiers abducted, overnight and on earlier Monday, at least twenty-three Palestinians, including nine children between the ages of nine and fifteen, during massive invasions and searches of homes in different parts of the occupied West Bank, including occupied Jerusalem.

In the Old city of Jerusalem, the soldiers invaded many homes and assaulted Mousa Abdul-Salam Kamil and his family, while violently searching their property.

In Al-Jiftlik town, in the Jericho Governate, the soldiers abducted four siblings, and later released three of them, and took the fourth, identified as Jom’a Jahalin, to a detention and interrogation center.

The soldiers also invaded and ransacked many homes in Azzoun town, east of Jenin, and interrogated several Palestinians while searching their properties. Two of them have been identified as Ali Rasheed Radwan and Sufian Abu Sharaf.

It is worth mentioning that Azzoun has lately been subject to constant invasions by Israeli soldiers and illegal colonialist settlers, while the army also invaded shops and homes, causing significant damage, and abducted many Palestinians.

Furthermore, resident Ali Bassel Adwan, from Azzoun Atma town, was abducted while crossing a military roadblock installed by the soldiers at the main entrance of the town.

In Hebron, in the southern part of the West Bank, the soldiers abducted four Palestinians, identified as Ateyya az-Zaro Tamimi, 42, his son Kifah, 20, Anas Bilal Natsha, 16, who was injured after the soldiers assaulted him in his home, and field researcher Hasan Salameen, 45, while working in the Old City.

In Bethlehem, the soldiers abducted a Saher Nafeth Thawabta, from Beit Fajjar town, south of the city, after invading his home and searching it.

In addition, the soldiers abducted Abdul-Hakim Hamed, 27, from Silwad town in the Ramallah Governate, in central West Bank, as he was crossing the al-Karama border crossing with Jordan, on his way back home.

The four children who remained in custody have been identified as Qussai Dirbas, 12, Anas Mahmoud, 12, Yazan Nouri, 13, and Yacoub Dabbagh, 15.