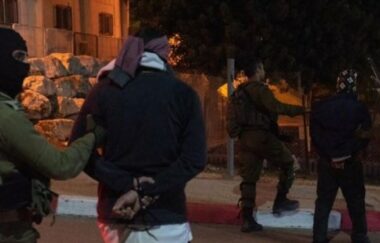 Mohammad Sabatin, the head of Husan Village Council, said the soldiers invaded the eastern area of the town before stopping and interrogating several Palestinians while inspecting their ID cards.

He added that the soldiers abducted Mohammad Rashed Sha’er, 17, and Qussai Fuad Hamamra, 17, while walking in the area and took them to the nearby Etzion military base.

The soldiers also confiscated a Palestinian car during the invasion and took it to Etzion.

In related news, Israeli soldiers assaulted a young man after forcing him out of his car in Bab al-Jadeed in the occupied capital, Jerusalem, in the West Bank.

Also on Wednesday evening, a group of fanatic illegal Israeli colonizers attacked several Palestinians on their lands in the Jabal Jales area, east of Hebron city, in the southern part of the occupied West Bank.

On Wednesday at dawn, the soldiers abducted twelve Palestinians from their homes in several parts of the West Bank.