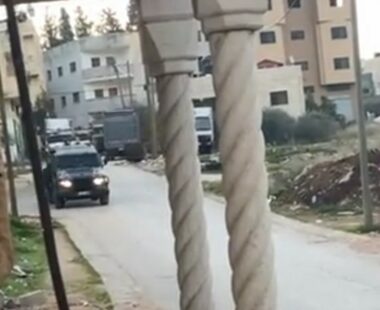 On Wednesday at dawn, Israeli soldiers abducted at least six Palestinians, including a former political prisoner, from their homes in several parts of the occupied West Bank.

In Qalqilia, in the northern part of the West Bank, the soldiers invaded Habla village, south of the city, searched homes, and abducted Omar Ahmad Odah, in his twenties.

In Jenin, also in northern West Bank, the abducted Omar Ibrahim Zyoud and Majd Saleh Jaradat from their homes in Silat al-Harithiya town, west of the city.

Furthermore, the army invaded Anabta town, east of the northern West Bank city of Tulkarem, leading to protests before firing many concussion grenades and gas bombs. The soldiers also invaded and ransacked at least one home in the town.

It is worth mentioning that, during the invasion, Palestinian resistance fighters fired live at the invading soldiers.

It is worth mentioning that, on Wednesday evening, the soldiers abducted two Palestinian teenage boys, identified as Mohammad Rashed Sha’er, 17, and Qussai Fuad Hamamra, 17, from Husan village, west of Bethlehem.

Also, a group of fanatic illegal Israeli colonizers attacked several Palestinians on their lands in the Jabal Jales area, east of Hebron city, in the southern part of the occupied West Bank.

On Wednesday at dawn, the soldiers abducted twelve Palestinians from their homes in several parts of the West Bank.