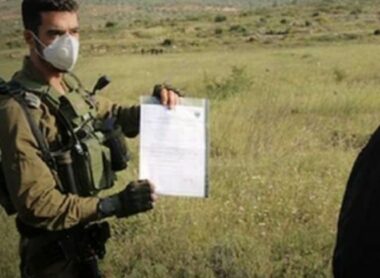 Israeli occupation authorities imposed, on Wednesday, stop-work orders for five Palestinian-owned structures in Marda village, north of Salfit in the northern West Bank, according to a local official.

Murad Khuffash, the head of the Marda village council, told the Palestinian News & Information Agency (WAFA) that occupation soldiers stormed the village to deliver stop-work orders to a number of Palestinian residents, under the pretext of being built in “Area C”.

The notices targeted an under-construction mosque, three houses, and a shop, and will also include an agricultural road that which will render farmers unable to reach their farmlands.

Meanwhile, also in the northern West Bank, Israeli soldiers compelled, on Wednesday, Palestinian store owners to close their shops in Huwwara village, south of Nablus, according to a local activist.

The closure was imposed under the pretext that some local Palestinians had allegedly thrown stones at illegal settler cars in the area.

The move is an act of collective punishment aimed at negatively affecting the livelihoods of the indigenous Palestinian population, aimed at forcing them out of their land.

Collective punishment is prohibited under International Law as shown in Article 33 of the Fourth Geneva Convention, as stated below.