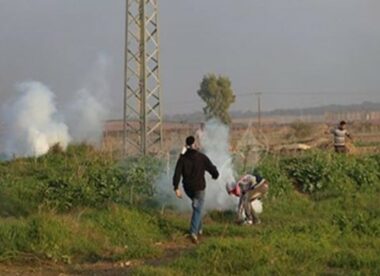 On Tuesday, Israeli soldiers fired many live rounds at Palestinian farmers and their lands east of Gaza city and east of Khan Younis in the southern part of the coastal region.

Eyewitnesses said the soldiers, stationed in military bases across the perimeter fence, east of Gaza city, fired many live rounds and gas bombs at the Palestinian farmers east of the Zeitoun neighborhood, southeast of Gaza city.

They added that the soldiers stationed in Kissufim military base also fired sporadic rounds of live fire and gas bombs at farmers and shepherds east of the Al-Qarara town, east of Khan Younis.

The attacks did not lead to casualties but forced the Palestinians to leave their lands to avoid further violations and escalation.

On Monday, several Israeli military vehicles, including armored bulldozers, invaded Palestinian farmlands near the perimeter fence in Beit Hanoun in the northeastern part of the Gaza Strip.

On Saturday, Israeli soldiers fired many live rounds and gas bombs into Palestinian agricultural lands and abducted one farmer, in addition to attacking fishing boats in the besieged Gaza Strip.

On Saturday morning, the soldiers fired sporadic rounds of live ammunition into Palestinian farmlands in the central and northeastern part of the besieged Gaza Strip.