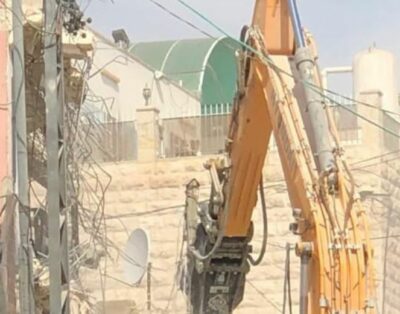 The Israeli army delivered a halt construction order, on Tuesday, to a Palestinian citizen in the southern occupied West Bank, the Palestinian WAFA News Agency reported.

Ali Mousa’s under-construction home, located in al-Khader town, south of Bethlehem, is the fourth home he has built, all three previous homes have been demolished by the occupation army.

Local activist, Mohammad Salah stated that a group of Israeli soldiers stormed the western area of the town, and handed Mousa a military order to halt further construction of the home, under the pretext of a lack of Israeli building license.

In addition, the occupation injured Palestinian civilians, and destroyed homes under a variety of alleged reasons, and uprooted 350 olive trees near the northern West Bank.

In November 2020, the Israeli authorities demolished, forced people to demolish, or seized 178 Palestinian-owned structures across the West Bank, the highest such figure in a single month since the United Nations Office for the Coordination of Humanitarian Affairs (OCHA) began systematically documenting this practice in 2009.

According to B’Tselem, on 17 June 2018, a new military order (Order No. 1797) went into effect. The order removes any option for Palestinians to challenge demolition orders that the Civil Administration issues for new structures, allowing Israel to demolish homes summarily.