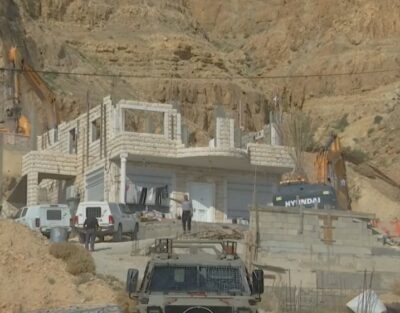 Palestine TV (Video) said the soldiers surrounded and isolated the village and prevented the Palestinians from entering or leaving it before invading it.

Palestine TV added that the military bulldozers and heaving machinery demolished six homes after forcing the families out.

The invasion was still ongoing at the time of this report, and the army is planning to demolish more homes in the village, which remains besieged.

Three years ago, the army demolished fifteen Palestinian homes due to Israel’s ongoing illegal colonialist activities and annexation of Palestinian lands after demolishing the property and uprooting lands.

Israel is trying to annex more Palestinian lands in the area, which would isolate the village from Jericho city and the villages of Ad-Duyuk Al-Foqa and Nu’eima.

The occupation authorities have been preventing the Palestinians from building, especially in the Esteih area, and have already handed many demolition and halt-construction orders.