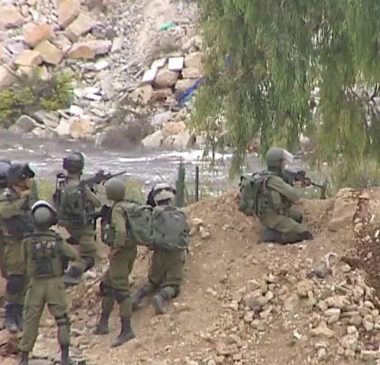 Israeli soldiers shot, Friday, three Palestinians with the Toto expanding bullets, and caused dozens to suffer the severe effects of teargas inhalation, after the army attacked dozens of protesters, in al-Biereh city, in the central West Bank governorate of Ramallah and al-Biereh.

The soldiers shot three Palestinians with the Toto expanding live rounds and caused dozens to suffer the effects of teargas inhalation, including several medics who rushed to the aid of wounded Palestinians.

Eyewitnesses said the soldiers fired dozens of live rounds, rubber-coated steel bullets, gas bombs and concussion grenades at the protesters, while some local youngsters hurled stones at them.

It is worth mentioning that the soldiers resorted to the excessive use of force against protests across the occupied West Bank and the Gaza Strip, on Friday, causing dozens of injuries, many of them with live fire.

The weekly processions have been ongoing since U.S. President Donald Trump made his illegal recognition of occupied Jerusalem as the unified capital of Israel, in early October of last year, in direct violation of International Law and various United Nations resolutions.