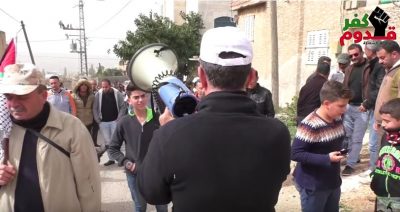 Israeli soldiers injured, Friday, eight Palestinians in Kufur Qaddoum town, east of the northern West Bank city of Qalqilia, and one child in the northern part of Qalqilia city, after the army assaulted dozens of Palestinian nonviolent protesters.

Morad Eshteiwi, the media coordinator of the Popular Committee against the Annexation Wall and Colonies in Kufur Qaddoum, said dozens of Palestinians and international peace activists held the weekly procession before the soldiers assaulted them with rubber-coated steel bullets and gas bombs.

Many youngsters burnt tires, and hurled stones at the invading soldiers, who shot three Palestinians with rubber-coated steel bullets and caused at least eight to suffer the effects of teargas inhalation. It is worth mentioning that the protests in Kufur Qaddoum are held every Friday and Saturday, and are ongoing for the seventeenth consecutive year, despite the excessive use of force by the army. The Palestinians are demanding the end of Israel’s colonist activities, and the reopening of their town’s main road, which was blockaded by the military 15 years ago for the benefit of illegal colonizers, living in Kedumim.

In addition, the soldiers shot a Palestinian child, only 13 years of age, with a rubber-coated steel bullet in his head, near the northern entrance of Qalqilia city, after the army attacked dozens of protesters.

The child received treatment by Red Crescent medics, before he was rushed to Dr. Darwish Nazzal hospital, in Qalqilia.

In related news, the soldiers shot five Palestinians with rubber-coated steel bullets in Jericho and caused dozens to suffer the effects of teargas inhalation.