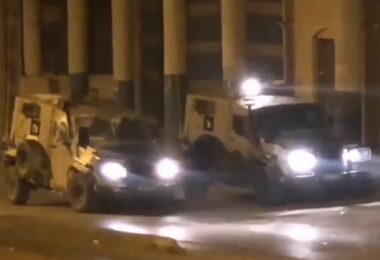 On Wednesday dawn, many armored Israeli military vehicles, including bulldozers, invaded the eastern area of Nablus city in the northern West Bank, leading to protests before the soldiers injured several Palestinians, including one who was rammed with an army jeep and abducted at least one.

The army invaded Nablus using many vehicles before the military bulldozers and started blockading Amman Street in the eastern part of Nablus with sand mounds before pushing more troops to facilitate the passage of many buses loaded with Israeli colonizers, in addition to army vehicles, to Joseph’s Tomb.

Dozens of Palestinians protested the invasion and hurled stones and Molotov cocktails at the military vehicles.

The soldiers also shot a young man with a high-velocity gas bomb in the leg, causing fractures, and rammed another Palestinian with their jeep before Palestinian medics rushed the wounded to a hospital in Nablus.

The army deliberately fired several live rounds and many gas bombs at Palestinian journalists to force them to leave, causing several injuries.

Furthermore, the soldiers invaded and searched many homes and abducted a young in the Dahia area in Nablus.