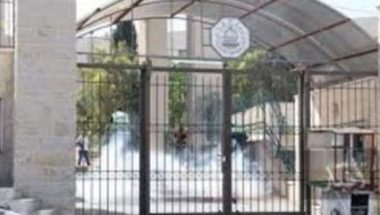 Israeli soldiers invaded, on Wednesday evening, the area surrounding the Al-Quds University, in Abu Dis town, east of occupied East Jerusalem, and clashed with many Palestinians, causing several residents to suffer the effects of teargas inhalation.

The soldiers surrounded the university area after invading it, and several neighborhoods in Abud Dis, and conducted provocative searches and interrogations of many students, leading to clashes.

The army fired many gas bombs and concussion at residents who hurled stones at them; medical sources said many Palestinians suffered the severe effects of teargas inhalation, especially after the army fired gas bombs into the university campus.