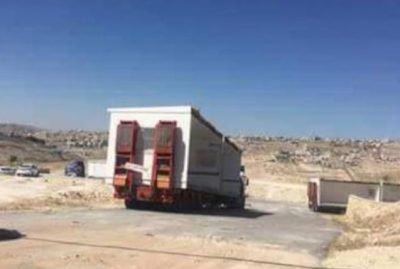 Eyewitness confirmed that the army installed several homes, after carrying them on huge trucks, while many bulldozers were seen operating in the area.

Jerusalemite activist Hani Halabiyya said the soldiers closed many roads in al-‘Ezariyya and Abu Dis towns, shutting traffic to al-Khan al-Ahmar, to prevent Palestinian, Israeli and international peace activists from entering the area to protest the displacement and demolition of the Bedouin community.

WAFA Palestinian News Agency said the Israeli bulldozers started the preparations since early morning hours, Sunday, after dozens of additional soldiers and officers were deployed there.

It is worth mentioning that the army first decided to go ahead with the demolitions and displacement of the Palestinian community after obtaining a green light from the Israeli High Court.

However, after the bulldozers started creating paths linking the main road with al-Khan al-Ahmar, to allow heavy machinery and trucks through to carry the displacement out, dozens of Palestinian, Israeli and international activists held constant vigils and nonviolent protest in the area. The soldiers resorted to the excessive use of force against the nonviolent protesters, and injured at least 35 of them, including Jerusalem governor and the head of Jerusalem Affairs Ministry Adnan al-Husseini, and the head of the National Committee against the Annexation Wall and Colonies, Walid Assaf, in addition to abducting ten, including three international peace activists, and one woman from al-Khan al-Ahmar.

On Thursday, July 5th, the Israeli High Court issued a temporary injunction temporarily halting the demolition of the Palestinian Bedouin.

The temporary injunction gave the army until July 11trh, to respond to a petition by the villagers, who said they were denied construction permits due to unfair policies.

Al-Khan Al-Ahmar is inhabited by 181 Palestinians, more than half of whom are children. They live without basic services, including running water, electricity, health services, and are surrounded by illegal Israeli colonies.

The inhabitants are from the Negev Desert, but were forcibly removed and displaced after the establishment of Israel in the historic land of Palestine, in 1948, and settled in the Plains area near Jerusalem, in 1953.

They have the deeds for the land, all legal and registered as part of ‘Anata village, the nearby Palestinian town. Nevertheless, Israeli authorities have refused to recognize those deeds.

Israel wants to displace the Palestinians in that area as part of its E1 colonialist project, which also aims at the illegal annexation of 12.000 Dunams of Palestinian lands, extending from East Jerusalem to the Dead Sea.

The project would also block any geographic contiguity between the central area of the West Bank, and its southern part.